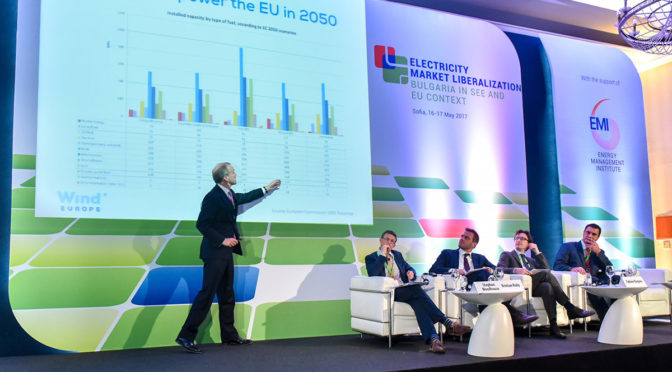 WindEurope CEO Giles Dickson spoke at an energy markets conference in Sofia on 16 May. It was a major event with the Bulgarian Energy Minister, government officials, industry and other stakeholders.

Bulgaria has 700 MW of wind power installed today, covering 4% of its electricity demand. Bulgaria is the biggest exporter of electricity in Southeast Europe. Its wind resources are excellent but largely untapped (especially alongside the Black Sea coast), making Bulgaria one of the top potential candidates for investments in the sector.

However, changes in the regulatory framework have hindered the development of renewables since 2011. They also mean existing wind farms are struggling financially, for example by paying (retroactively introduced) grid balancing charges of up to €24/MWh.

In 2015, the government requested technical assistance from the World Bank to liberalise the energy market. The World Bank recommended the introduction of “day ahead” and “intra-day” markets at the newly-established Bulgarian Independent Electricity Exchange (“BIEE”). The target date for the implementation of these markets is 1 July 2017.

In his presentation, Dickson shared best practices in Europe on integrating wind and illustrated how coal is on the way out whilst renewables are on the rise. Last year, wind power overtook coal as the second largest power capacity in the EU, providing now more than 10.4% of the EU’s electricity demand. Wind power is not only abundant but also competitive in Bulgaria today. Dickson highlighted the economic benefits more wind would bring to Bulgaria as the cheapest form of new power (and competitive with existing coal around 2028), and as a provider of local jobs and growth.

In order to make the market fit for renewables, Bulgaria would benefit from a functioning intraday and balancing market as well as modernising the transmission and distribution system.

Bulgaria has the Presidency of the EU in the first half of 2018 – a crucial time since this is when the negotiations on the EU’s Clean Energy Package are likely to come to a head. Dickson highlighted both the opportunity and responsibility this entails for Bulgaria. The credibility of their Presidency, he said, will be undermined if they have not taken certain steps before overseeing negotiations on EU renewables legislation. Here he emphasised both the need for Bulgaria to submit its draft national energy plan to Brussels – as the Commission wants – and the necessity for Bulgaria to fully arrange the finances of its existing wind farms.