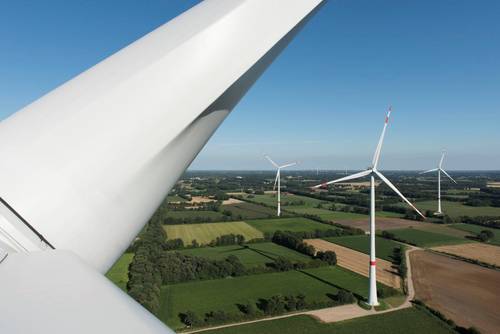 Earnings before interest, taxes, depreciation and amortization (EBITDA) amounted to EUR 51.2 million. At 7.9 percent, the operating margin was within the target corridor, chiefly underpinned by an increased gross margin of 29 percent, which reflects the growing Service business.

Nordex continues to have a solid balance-sheet structure. The equity ratio stood at 33 percent as of the reporting date (December 31, 2016: 31.4%). In preparation for rising installation volume over the upcoming quarters, the group has accumulated inventories, temporarily causing the working capital ratio to rise to 8.4 percent.

At the same time, capital spending climbed to EUR 35.7 million (Q1/2016: EUR 15.1 million). This was primarily due to the acquisition of plant and equipment for the production of new core components. Nordex continued to invest in the development of new competitive products.

The transition to auction based mechanism, in the core European markets, caused group order intake to drop to EUR 333 million (Q1/2016: EUR 541 million).

As of the reporting date, Nordex had an order backlog of EUR 3.8 billion (incl. Service), which forms the basis for confirming the full-year guidance for 2017. Thus, sales are expected to lie within the range of EUR 3.1 to 3.3 billion, accompanied by an EBITDA margin of between 7.8 and 8.2 percent. The Management Board expects the working capital ratio to drop to 5 – 7 percent in the second half of the year due to prepayments for new orders.

Says Nordex CEO José Luis Blanco: “Our medium-term goal is to improve market share and profitability. For this reason, we are stepping up spending on our technology as well as lowering production costs.”

The Q1/2017 report will be available on the Nordex web page.