San Roman Wind Farm, with 93MW, will produce energy to power more than 30,000 homes. The company reaches 721 MW of wind capacity in the country. 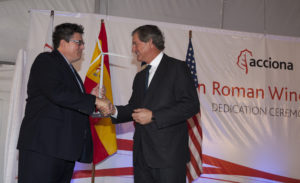 Photo caption 2: ACCIONA Chairman and Secretary Pablos greet each other on stage at the San Roman Wind Farm dedication ceremony.

ACCIONA Energy, a leading global operator of renewable energy projects, yesterday inaugurated the 93-megawatt (MW) San Roman Wind Farm. ACCIONA Chairman José Manuel Entrecanales and Texas Secretary of State Rolando Pablos presided over the ceremony, which was attended by business and community leaders from across Texas and the U.S.

Chairman Entrecanales said that “today, renewable energy is the lowest-cost option for generating electricity. With a strong electric market and a great business climate, Texas has attracted wind energy development and guaranteed an affordable source of power for its growing economy.We are committed to increasing the development of renewable energy worldwide and the U.S. is one of our top strategic markets. We are looking for future opportunities that will create benefits both for ACCIONA and for the communities that host our projects.”

In his speech, Secretary Pablos said: “As one of Texas’ top foreign direct investors, Spain is a close friend, ally, and trade partner, and we are honored to join them in celebrating the inauguration of this important renewable energy project, which will help power economic development in the border region and beyond I am confident that ACCIONA’s commitment to the local community will further strengthen the infrastructure of the region to support even more investment and job growth.”

The San Roman Wind Farm is expected to generate $30 million in tax revenue for local school districts and other public services and approximately $25 million in lease payments to local landowners over its operating life.

As part of ACCIONA’s commitment to supporting the local community, the company also established a scholarship program with local school districts that will provide merit-based scholarships to two deserving students each year for the full life of the project. Chairman Entrecanales and Secretary of State Pablos awarded the first of those scholarships at the dedication ceremony. ACCIONA provides similar scholarship programs at all its U.S. windfarms.

Construction of the San Roman wind farm was completed in 11 months and generated more than 100,000 hours of work for local contractors.

ACCIONA has also started construction on a new 168 MW wind farm and will install a 339 MW solar plant in Mexico, both expected to be completed by the end of 2018.

ACCIONA has committed to invest around $2.5 billion between 2016 and 2020 to build renewable energy installations worldwide, increasing the company’s capacity by approximately 1,900 MW.