The success of the recent German offshore wind tender, in which three sites totalling 1.38GW of new capacity were awarded contracts by bidding in at zero, could encourage countries to re-evaluate their offshore wind capacity goals, industry experts have told ICIS.

The results follow significant offshore wind cost reductions seen in 2016, when the record for the lowest subsidy price was broken three times by projects in Denmark and the Netherlands.

Most of the countries in the North Sea have long-term capacity targets for offshore wind, but these targets may be adjusted in response to the dramatic cost reductions that are now being seen. 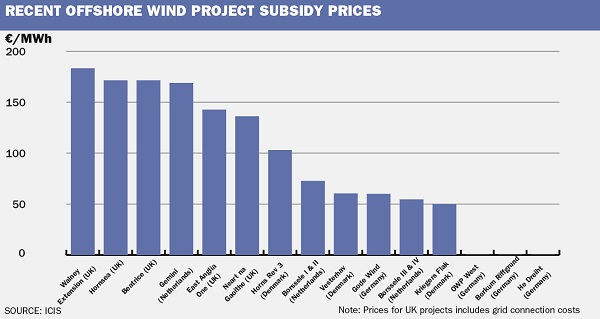 The UK is the global leader in installed offshore wind capacity, but is yet to record the significant subsidy price reductions seen in mainland Europe.

The government is currently holding an auction for renewables, in which offshore wind is expected to be the main beneficiary. According to ICIS modelling , the auction is likely to clear in the range of £70-90/MWh for offshore wind – which could result in between 1.5GW and 2.5GW of capacity being awarded contracts.

The government’s last statement about its long-term goals was back in 2015 when then secretary of state for energy, Amber Rudd, said the government could support up to 10GW of new capacity in the 2020s.

However, this was before the cost reductions seen in Denmark, the Netherlands and Germany and is likely to now be reassessed.

Chris Willow, associate director at renewable consultancy BVG Associates, said that the goal could be increased to 14GW deployed in the 2020s, though the eventual target will be influenced by the result of the ongoing auction and by the upcoming election on 8 June.

Germany’s switch to the tendering model used in Denmark and the Netherlands has paid immediate dividends through the subsidy-free contracts awarded to EnBW and DONG. The next auction for offshore wind is due to take place on 1 April 2018, offering 1.6GW of capacity.

Given the recent results, the targets could be increased once again, though Marcel Munz, energy expert at PA Consulting, told ICIS that the fall in costs is unlikely to lead to a significant upward revision of offshore expansion targets in the short to mid-term.

“The 2030 target might be increased a bit, but not much as grid expansion speed sets limits on wind power expansion,” Munz said. ”The opposition of some environmental organisations to offshore farms is another obstacle.”

The Netherlands is targeting 4.5GW of offshore wind capacity by 2023, with the government directly tendering 3.48GW of this capacity.

The success of the Borssele tenders in 2016, which were awarded to DONG and Shell for €72.70/MWh and €54.50/MWh respectively, led to a non-binding motion being passed in parliament for the government to explore the possibility of adding an additional site by 2023.

Following an election in March, coalition talks are ongoing, with the Green Party likely to be a member of the coalition. Given the falling costs of offshore wind, the country’s slow progress towards renewable and greenhouse gas reduction targets, and the likely makeup of the new coalition, the Netherlands may well decide to tender an additional site for 2023 or increase the existing plan for 1GW per year to be added between 2023 and 2030.

France currently does not have any offshore wind capacity in operation, but is likely to meet the target of 3GW installed by 2023. In 2016, the government said that up to 6GW could be installed by 2023, though this seems unrealistic given the country’s current lack of capacity.

The long-term prospects for offshore wind will be significantly affected by the upcoming election, with Emmanuel Macron the candidate most likely to support additional wind projects.

Marine Le Pen has called for further developments into wind power to be suspended, while Francois Fillon is in favour of tenders for large-scale renewable installations, which is in line with current policy.

Denmark does not have any long-term capacity targets for offshore wind, though the energy minister, Christian Lilleholt, announced a target only last month of becoming the first country in the world to achieve subsidy-free offshore wind.

While the German result has spoilt that goal already, the low subsidies seen in Denmark in 2016 suggests that the country could be the next to achieve this target. matthew.jones@icis.com