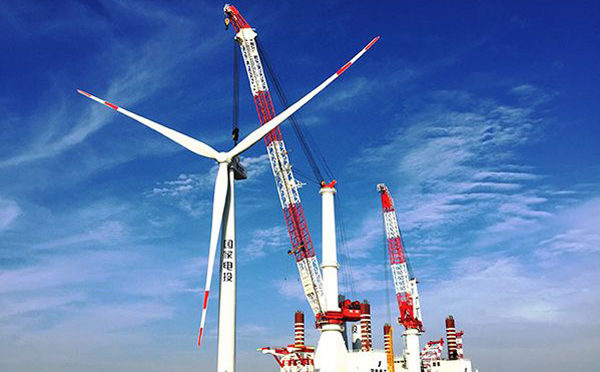 State Power Investment Corporation (SPIC), one of the top five power generators in China, is making swift progress in raising its planned 800 megawatts wind power farm off the coast of eastern China’s Yancheng, Jiangsu province. Once completed, the farm will eclipse the 630 MW London Array as the world’s largest offshore wind farm. It is set to enter full operation in 2018. 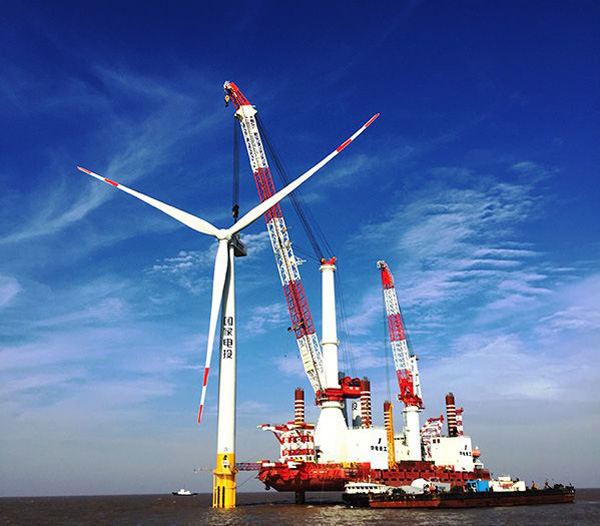 Maturing technology and increasing competition have helped to reduce costs, making offshore power increasingly competitive. The push to expand offshore has been driven by the fact that many major economic hubs in China are located near the coast, analysts said.

The construction of Yancheng project will occur in three phases. The first 100 MW installed capacity consists of 25 4.0 mW Siemens turbines, which are already spinning, occupying 20 square kilometers of water just 10 meters from shore. By March 2017, this portion of the project had generated 190 million kWh of electricity.

The second phase of construction is currently underway, set to boost installed capacity by another 400 MW by October 2017 using 100 wind turbines. A 2*240,000 kVA transformer will be used in its floating booster station designed by Danish firm Ramboll. Once installed, it will become Asia’s largest offshore booster station and China’s first booster station to follow European standards.

Due to start in the second half of 2017, the third phase of the project is situated further south. Wind turbines with 300 mW of capacity will be erected in the water at a depth of 18 meters, 36 kilometers from the shore. In order to benefit from the annual average wind speed of 7.43m/s, the yearly utilization time of the turbines will be 2,545 hours. This phase of construction is expected to be completed in 2018.

SPIC is a global green energy provider with a total installed capacity of 117 gW. It operates in the industries of coal, aluminum, logistics, finance, environmental protection and advanced technology. It maintains a presence in 36 countries and regions, including Australia, Chile, Malta, Japan, Brazil, Turkey and Vietnam.