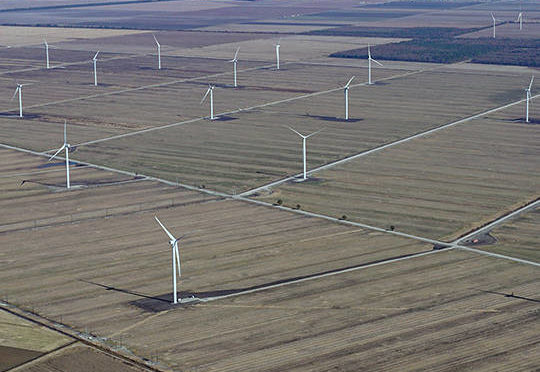 Local support flies in the face of Republican opposition, and some long-resistant states like North Carolina are now poised to join the country’s wind power surge.

On a breezy day in late January, Katharine Kollins, the president of the Southeastern Wind Coalition, walked 13 North Carolina legislators across fields of farmland outside Elizabeth City, N.C. The tour’s goal was to show just what 104 wind turbines looked like, how beautifully they can flow into an agricultural landscape.

Kollins brought the legislators, all Republicans and many of whom had spent years trying to block the project, to the first major wind farm in the Southeast that began operating late last year. Several weeks earlier, a group of the lawmakers had written to President Donald Trump‘s transition team, asking them to shut down the Amazon Wind Farm U.S. East, which is owned by Avangrid Renewables and provides power to Amazon Web Service’s data centers. The legislators called it an “unacceptable threat to our national security” that ruined the landscape. It’s unclear what Trump could do to remove the turbines and it would be an unpopular move: Local communities, businesses and even the military support the project.

“Once you see, hear and feel these machines, and are able to get a sense of how well they integrate into an agricultural landscape, it is hard to have too much negative to say,” Kollins said.

In the case of these legislators, she turned out to be right. After the tour, House Speaker Tim Moore released a statement saying the wind farm “takes advantage of a valuable natural resource our state has to offer.”

It has been a long, uphill battle for wind energy proponents in states like North Carolina.

Across the country, wind energy is growing rapidly, surpassing hydropower dams as the largest source of renewable energy in the country. By the end of 2016, the wind industry supported more than 100,000 jobs. But the Southeast has almost completely been left out of that boom. State lawmakers and utility companies have been reluctant to break from fossil fuels, technological advancements have been slow, and the geography of the region is not entirely conducive to large-scale wind.

The new North Carolina wind farm could signal a shift for the region. Despite heavy opposition and campaigns against renewable energy in  the state, developers successfully fought for approval to build the $400 million Amazon wind farm. Now, other wind farms are in the works in nearby states, including Virginia.

“Wind is coming to the Southeast,” said Steve Kalland, director of the Clean Energy Technology Center at North Carolina State University. “As utility business models continue to evolve to be more accommodating to renewables and more areas in Southeast are open to it, it’s pretty much inevitable.”

Fighting the Wind Farm at Every Step

Wind generated 5.5 percent of electricity in the U.S. last year and is on track to supply 10 percent by 2020, according to a recent report from the American Wind Energy Association. Fourteen states generated at least 10 percent of their power from wind, largely in the Midwest and Plains states. Last year, the only Southeastern state producing wind power was Tennessee, where wind made up 0.1 percent of electricity production.

With its new project, North Carolina became the 41st state to generate wind energy, and the second in the Southeast.

The Amazon wind farm sprawls across 22,000 acres of privately owned farmland in eastern North Carolina. It has been in the works for nearly eight years, with Republican lawmakers and the state’s powerful utilities fighting the project at nearly every step by making the permitting processes more cumbersome and introducing legislation to outright ban wind energy while the farm was being built.

In 2013, North Carolina’s Republican-led legislature passed a law that required more permitting guidelines and applications for wind energy facilities, even though many of the permits were already required. Legislators also argued the 500-foot tall turbines would interfere with military radar in Virginia, even though the Department of Defense approved the project. Two years later, Republicans tried to ban wind energy through legislation in the state for similar reasons. That didn’t pass, but Avangrid reduced the number of wind turbines from 150 to 104 in response to the concerns.

Despite what legislators said, the project had wide support across the state.

The Navy repeatedly said the wind farm was not a problem, local communities supported it, and renewable energy advocates like the Southeastern Wind Coalition lobbied against these measures. Farmers and other residents of Pasquotank County, where the farm is located, voiced their support for the farm for years, and the Elizabeth City Economic Development Commission released an official statement of support when the lawmakers penned their letter to Trump. Developers report it has the potential to power 61,000 homes and will supply power to an electrical grid that serves Amazon’s data centers.

At the end of March, however, state lawmakers introduced a bill that would place a three-year moratorium on wind energy development to study the safety risks of wind farms near military bases.

A similar storyline is playing out in many Southeastern states. But even with the resistance to renewable energy, wind production is poised to grow as technology improves and costs fall.

The Southeast is densely populated and densely forested. Between the Appalachian Mountains and the Blue Ridge Mountains are rolling hills and valleys—not optimal for wind turbines. According to Hannah Hunt, senior analyst at the American Wind Energy Association, the last generation of turbines were too short to reach strong wind levels in that kind of topography. But in the last three to five years, taller turbines and longer blades have allowed them to “access faster, steadier speeds, and the make project economically viable,” Hunt said. “So the geographic footprint of the industry is expanding to the Southeast, where we haven’t seen it.”

That has led to more states proposing wind projects. The Virginia Department of Environmental Quality recently approved plans for a wind farm on top of a ridgeline near Roanoke. Several wind energy experts also said areas like northwest Mississippi, farmland in South Carolina, and parts of Appalachia that have been cleared for surface mining could be prime wind farm locations. Offshore wind off the coast of North and South Carolina is also on the table, but coastal developers have lobbied hard against them. The Bureau of Ocean Energy Management, however, launched the first lease for one of North Carolina’s offshore wind energy areas in early March. “We have a 10-year or more time horizon before offshore wind becomes an economic conversation, but it’s got to start somewhere,” Kalland added.

Even in areas where wind production isn’t feasible yet, states are getting involved in various parts of the industry. A Louisiana company builds platforms for offshore wind turbines and South Carolina has 33 facilities that manufacture turbines, employing more than 1,100 people. Several Florida companies produce parts for turbines. And, with the advancement of electrical transmission lines, some communities are buying power from the Midwest, where the majority of wind energy is generated. The Plains and Eastern Clean Line will transfer 4,000 megawatts of low-cost wind power from Oklahoma’s panhandle to parts of Arkansas and Tennessee. The Southern Cross Project will transmit at least 2,000 megawatts from Texas to Louisiana, Mississippi and other parts of the Southeast.

A Long Way Still To Go

Even so, the Southeast has a long way to go. The attachment to coal—geographically culturally, and economically—is a major barrier to renewable energy. Major utility monopolies like Duke Energy in North Carolina and Dominion Power in Virginia are still reliant on the fossil fuel industry, and unless they deregulate their markets—which no Southeastern state has done yet—they would have to choose to choose to diversify their energy portfolio with renewables.

Local and state lawmakers across the region, lobbied and supported by those utilities and other fossil fuel interests, have continually pushed against clean energy. State representatives in Tennessee have worked for more than a year to get the state’s utility provider, Tennessee Valley Authority, to reject a large-scale wind farm. “There’s a series of political interests that trace their financial roots to the oil and gas industry, and they’re working fear-mongering tactics at the local level,” Kalland said. 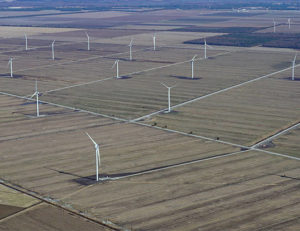 It’s largely up to renewable energy advocates like the Southeast Wind Coalition to push for these projects one at a time, starting at the local level. From touting the economic benefits of wind farms, to educating people about legislation, to literally walking lawmakers through a wind farm, it is a long process.

“We’ve got technology to make wind economically viable in the Southeast, so it’s a matter of policy,” Kollins said. “Having the opportunity for lawmakers and utilities in Southeast to see [the Amazon wind farm] firsthand can dispel a lot of potential myths.”