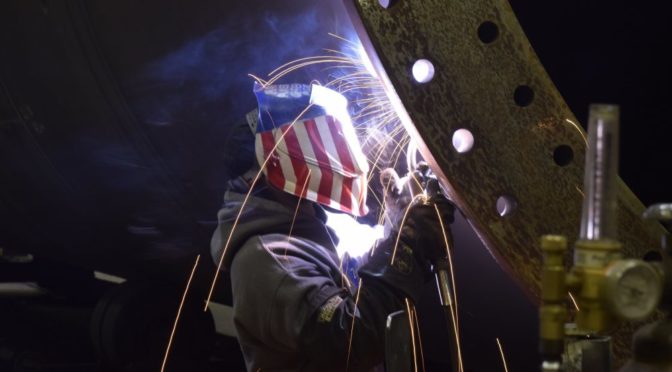 During my tour through Wisconsin last week, I learned Trinity isn’t the only company doing this—Broadwind Towers is also giving a second life to a decades-old factory in the city of Manitowoc.

In 2004, Broadwind opened up shop in a factory that has been part of Manitowoc since the 1930’s. During WWII, the plant made submarines for the war effort, and later built crane parts. Now, it churns out sections of wind turbine towers that are shipped across the country by rail, truck and even boat, employing 330 workers. The factory has the capacity to build up to 350 wind turbine towers every year.

Every day, giant steel plates roll into the facility, where they’re shaped, bent and welded into wind turbine tower sections.

During my visit, I spoke with veterans of the Marines and Navy, and women who worked their way up from entry-level roles to supervisory positions.

They all loved their jobs and felt they were building something of value. It was important to them to make these products in the U.S., which in turn help the country move forward on its path to energy independence.

There was also a strong sense of pride in continuing Wisconsin’s manufacturing tradition. Everyone I spoke with came from a manufacturing background—previous careers included building office furniture or making vitamins, or their parents worked in Manitowoc’s factories.

Over the last 20 years, many of the city’s factories have struggled or even closed. So having several hundred well-paying jobs at Broadwind provides a big boost to the local economy, both in Manitowoc and the surrounding areas. Some employees happily travel from Green Bay or other towns, an hour or more away.

The factory was bustling during my visit. Sparks were flying and giant pieces of steel were moving through the production floor. Broadwind Towers offers yet another great example of the more than 500 U.S. factories that build wind-related parts, creating new steady jobs and plenty of opportunities for career growth. It concretely shows how wind power is filling the gaps left by manufacturing that has shut down or moved overseas. Broadwind’s Manitowoc employees can definitely feel proud of that.