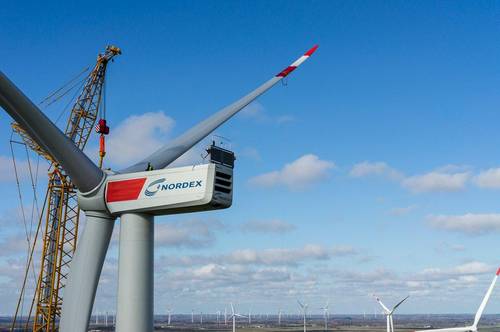 On the basis of its provisional consolidated financial statements for 2016, the Nordex Group (ISIN: DE000A0D6554) achieved its targets. Sales climbed by 40% to EUR 3.4 billion, including sales of EUR 726 million contributed by the new subsidiary Acciona Windpower (AWP), which was consolidated from 1 April 2016 following the acquisition.

The main sales driver was Europe with EUR 2.3 billion, equivalent to a share of 69%. The share accounted by the Americas increased sharply to 22% (2015: 11.7%). This success is materially due to the new subsidiary AWP, which holds a strong position in these growth markets. Total sales also include the service business, which grew by 28% to EUR 271.6 million.

Operating earnings (EBITDA) climbed by 56.6% to EUR 285.5 million, translating into a margin of 8.4%, which is slightly above guidance.  Consolidated net profit increased by 82.4% to EUR 95.4 million.

Cash flow of EUR 144.4 million was generated from operating activities. Excluding the acquisition of AWP, free cash flow amounted to EUR 51.0 million. The working capital ratio was 4.1% as of the reporting date. The improvement in the fourth quarter was materially due to the sharp year-end increase in order intake.

As stated on 23 February, the Management Board projects sales of EUR 3.1 – 3.3 billion in 2017. The decline over the previous year is due to project postponements in some core markets and delays in entry into the Indian market. Despite lower capacity utilization, profitability should remain stable thanks to the synergy benefits harnessed from the merger with AWP and the absence of most of the non-recurring expenses that had arisen in 2016. The EBITDA margin is expected to amount to between 7.8% and 8.2%.

Turning to 2018, management expects sales to grow again to EUR 3.4 – 3.6 billion accompanied by stable profitability. Says Lars Bondo Krogsgaard, CEO of the company: “In order to improve profitability, we will focus more strongly on activities that offer above-average margins. At the same time, we will step up spending on products to secure targeted competitive advantages.”