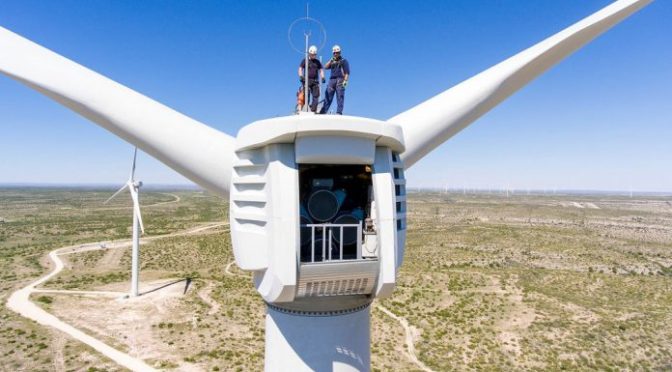 BP is mulling plans to upgrade as many as 200 of its wind turbines in the United States, Bloomberg reported. The energy giant is looking to update the aging equipment with newer, higher-capacity equipment in a bid to improve efficiency and reliability while increasing overall energy output.

Laura Folse, chief executive of BP Wind Energy, said the move would allow the U.K. energy giant to capitalize on production tax credits while optimizing operations at farms in Texas and Kansas. The company put an initial investment down in December in order to qualify for the full tax credit, which started scaling down this year.

The updates involve swapping out aging equipment such as gearboxes, drive trains and blades, while keeping existing towers and foundations. BP expects the upgraded technology to improve efficiency and reliability while increasing overall energy output.

“It’s not a done deal, but it is very real,” Folse said in an interview. “The newer technology and the improvements make it economic,” Folse said.

With 14 wind farms — including one operated by another company in Hawaii — BP says it has the largest wind-energy business of all major oil companies. BP tried selling off its wind business in 2013, ultimately dropping the plan after failing to find a suitable buyer.

Folse said she was initially skeptical of the economics of replacing equipment at BP sites, including the 60-megawatt Silver Star Wind Farm near Dallas, Texas. But the company seized on the idea as a way to lower operating costs and make its wind more competitive against natural gas-fired power. That’s especially important in Texas, where BP doesn’t have long-term contracts in place to sell wind energy and must compete with the daily vagaries in the power markets.

Congress’ renewal of the production tax credit in 2015 gave wind farm developers a powerful incentive to retrofit turbines, said Alex Morgan, a New York-based analyst for Bloomberg New Energy Finance. Thousands of turbines totaling 9,700 megawatts across the U.S. are between 10 and 20 years old, making them a prime target for upgrades, she said.

BP made an investment at the end of last year that gives the company the option to buy replacement equipment for about 200 wind turbines and still qualify for the full production tax credit, worth 2.3 cents per kilowatt hour of electricity over the next 10 years.

That approach was mirrored by other companies with enough room in their balance sheets to support at least a 5 percent down payment, Morgan said.

The value of the credit drops annually through 2019. In order to qualify for the tax credit at the 100 percent level, wind developers must have begun construction by the end of last year or committed at least 5 percent of the project costs.

BP now has roughly four years to install the equipment to claim the credit. Folse declined to specify the potential project expense or the suppliers it’s considering.

Such repowering may become more common throughout the industry as wind developers take advantage of the production tax credit to offset the cost of replacing aging, less-efficient blades and gearboxes with new, improved models.

BP’s last big investment in its renewable portfolio came with the installation of its Trinity Hills wind farm near Olney, Texas in 2012.