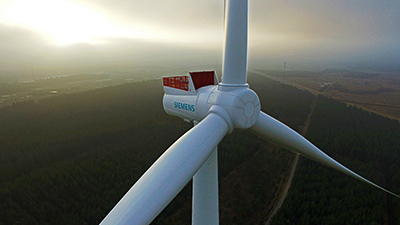 Siemens Wind Power has installed the latest version of its offshore direct drive wind turbine at the national test center in Østerild, Denmark – according to plan. The SWT-8.0-154 is rated at 8 megawatts (MW) and equipped with the proven 154-meter rotor. The prototype was certified by DNV GL in January, confirming all relevant safety features for test operation. The new offshore turbine was installed on a steel tower at a hub height of 120 meters. The prototype will be used for both mechanical and electrical testing. The final type certificate is expected for 2018.

The prototype in Østerild, Denmark, will be used for both mechanical and electrical testing till type certification next year.

With the full commissioning of the prototype, Siemens will enter the final development phase for the new turbine that allows for up to 10% higher annual energy production (AEP) under offshore wind conditions than the 7-MW model. The upgrade to eight megawatts enables a rated power increase of more than 14% from 7.0 to 8.0 MW. Similar to the previous upgrade from 6.0 MW to 7.0 MW, the 8-MW turbine will benefit from the established supply chain and proven offshore direct drive technology components. Since the higher rating will be achieved with only a few component upgrades including a new cooling concept and a new control system, customers will again benefit from key value drivers including fast time-to-market and low risk.

“The installation of the SWT-8.0-154 prototype in Østerild is an important milestone in the success story of our offshore direct drive wind turbines,” states Michael Hannibal, CEO Offshore at Siemens Wind Power. “The evolution based on our platform strategy demonstrates that innovation to lower the cost of wind energy can work without compromising the proven reliability of a technically mature product.”

The offshore direct drive is the youngest Siemens wind turbine platform. It has already made an impact: Recently 100 years of combined operation were reached with 2.5 terawatt-hours (TWh) of electricity produced. The total energy yield harvested by Siemens offshore direct drive generators installed by the end of 2016, corresponds to the energy demand of all households in the city of Munich for an entire year. This amount of electricity has been produced in less than six years, starting with the first SWT-6.0-120 prototype to large offshore projects now in operation like Westermost Rough in the UK and Gode Wind in German waters. At the same time Siemens’ Offshore Direct Drive platform helped to avoid 1,250,000 metric tons of CO2 emissions. This corresponds to the emission of all cars in a city the size of Munich over a period of four months. The latest model SWT-8.0-154 is expected to enter serial production in 2019.