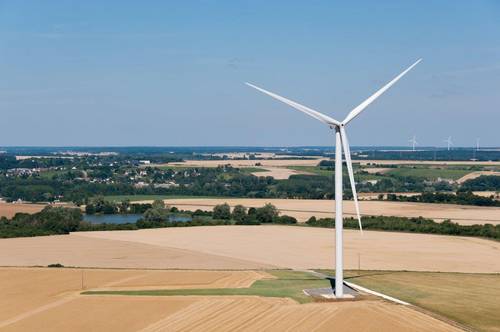 Located in the Aube department, in France, on the territory of the Sainte-Maure and Saint-Benoît-sur-Seine municipalities, Les Monts wind farm comprises 4 wind turbines of 3.3 MW, for a cumulative capacity of 13.2 MW.

This commissioning brings to 746 MW the installed capacity operated by FUTUREN, of which 374 MW are for own account.

In France, FUTUREN operates 78 wind turbines for its own account, for a cumulative installed capacity of 159 MW.

After the commissioning of the Chemin Perré wind farm in the Aube French department in October 2016, Les Monts is the second wind farm installed by FUTUREN in this department. FUTUREN is actively pursuing the completion of its project portfolio and will launch, as planned, the construction works for the 21 MW Courant-Nachamps wind project in the coming weeks, the commissioning being planned in early 2018.

FUTUREN is an independent producer of wind energy, active over the entire wind value chain. The Group develops, builds and operates wind farms in four countries: Germany, France, Morocco and Italy. In total, the Group operates 746 MW for its own account and for third parties.