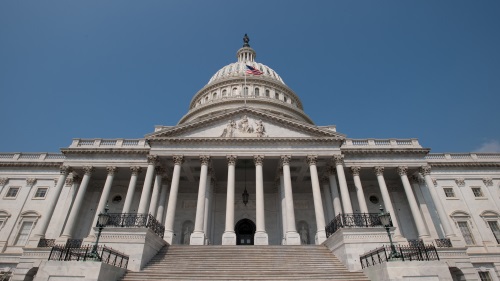 Energy Secretary nominee and former Texas governor Rick Perry highlighted wind energy throughout his Senate confirmation hearing today. Nearly every mention of wind was positive as both Senate Republicans and Democrats on the U.S. Senate Energy and Natural Resources Committee looked to find out more about Perry’s stance on a series of energy topics. Perry’s comments about wind power mostly related to Texas’ success creating jobs for over 25,000 wind workers and reducing emissions with clean, renewable wind energy.

Perry brought up Texas’ leadership as a wind energy producer several times during the 3.5-hour hearing, including during his opening remarks:

“We truly advocated an all of the above strategy, reducing carbon emissions, not just through development of cleaner fossil fuels, but through the development of renewable resources as well. During my time as governor, Texas took the national lead in wind energy development. If confirmed, I will advocate and promote energy in all forms, and that certainly includes our renewables. America has been blessed with vast natural resources and the technology to utilize them. I’m committed to helping provide stable, reliable, affordable and secure sources of American energy. An America-first energy strategy is important to create jobs and to grow the economy.”

Sen. John Cornyn (R-Texas) and Sen. Joe Manchin (D-W.V.), who introduced Perry at the hearing, both mentioned his record on wind energy as well.

2) Sen. Gardner: Colorado’s got wind, too

“I think over the past couple of years we’ve even been higher-ranked in production of installed wind capacity. We have 14 wind manufacturing facilities. We’re at the leading edge of turbine manufacturing, blade manufacturing, tower manufacturing… It’s incredible to see what we’ve done with an all-of-the-above energy policy in Colorado.”

In response, Perry said he will continue to work on grid modernization issues – which will help bring wind energy where it’s produced to where it’s consumed – and visit the National Renewable Energy Laboratory (NREL) in Golden, Colo.

Unfortunately, Franken’s time expired before he was able to complete his thought, but the Senator made an important point about how the wind industry creates jobs in America’s small towns.

Sen. Tammy Duckworth (D-Ill.) pointed out the importance of the federal government in bringing clean energy technologies including wind to scale:

“With the successes you’ve seen in wind energy, I know you must recognize that these gains could not have been made without federal support. Our nation’s wind industry would not be where it is today without the federal government. And I want to replicate the success in wind energy that you saw in Texas under your leadership. I want to do that in Illinois and across the nation.”

“My homestate aggressively and very positively supported [wind growth]. There is I think a role for the DOE as we go forward, continuing to find the technological advances, whether it’s on turbines, whether it’s on blade design, whether it‘s on some other aspect… I do believe there is a role for us to play, both at the state level and at the federal level, to continue to put forward – funded by our taxpayer dollars – technologies that can in fact make us more efficient, make us more economically viable, improve our quality of life… That is what I believe, and the Administration knew that when they asked me to serve in this role.”