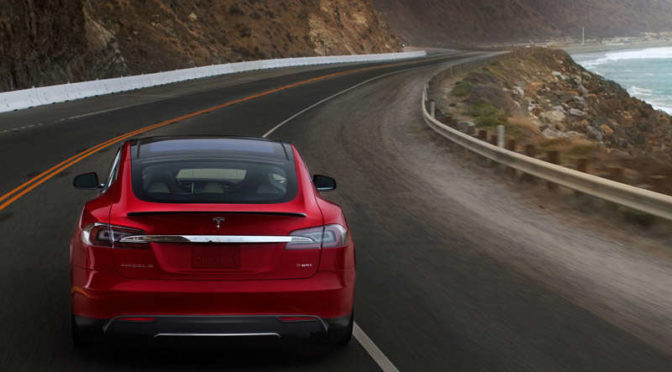 With all good technologies, there comes a time when buying the alternative no longer makes sense. Think smartphones in the past decade, color TVs in the 1970s, or even gasoline cars in the early 20th century. Predicting the timing of these shifts is difficult, but when it happens, the whole world changes.

It’s looking like the 2020s will be the decade of the electric car.

Battery prices fell 35 percent last year and are on a trajectory to make unsubsidized electric vehicles as affordable as their gasoline counterparts in the next six years, according to a new analysis of the electric-vehicle market by Bloomberg New Energy Finance (BNEF). That will be the start of a real mass-market liftoff for electric cars.

By 2040, long-range electric cars will cost less than $22,000 (in today’s dollars), according to the projections. Thirty-five percent of new cars worldwide will have a plug.

This isn’t something oil markets are planning for, and it’s easy to see why. Plug-in cars make up just one-tenth of 1 percent of the global car market today. They’re a rarity on the streets of most countries and still cost significantly more than similar gasoline burners. OPEC maintains that electric vehicles (EVs) will make up just 1 percent of cars in 2040. Last year ConocoPhillips Chief Executive Officer Ryan Lance told me EVs won’t have a material impact for another 50 years—probably not in his lifetime.

But here’s what we know: In the next few years, Tesla, Chevy, and Nissan plan to start selling long-range electric cars in the $30,000 range. Other carmakers and tech companies are investing billions on dozens of new models. By 2020, some of these will cost less and perform better than their gasoline counterparts. The aim would be to match the success of Tesla’s Model S, which now outsells its competitors in the large luxury class in the U.S. The question then is how much oil demand will these cars displace? And when will the reduced demand be enough to tip the scales and cause the next oil crisis?

First we need an estimate for how quickly sales will grow.

Last year EV sales grew by about 60 percent worldwide. That’s an interesting number, because it’s also roughly the annual growth rate that Tesla forecasts for sales through 2020, and it’s the same growth rate that helped the Ford Model T cruise past the horse and buggy in the 1910s. For comparison, solar panels are following a similar curve at around 50 percent growth each year, while LED light-bulb sales are soaring by about 140 percent each year.

Yesterday, on the first episode of Bloomberg’s new animated series Sooner Than You Think, we calculated the effect of continued 60 percent growth. We found that electric vehicles could displace oil demand of 2 million barrels a day as early as 2023. That would create a glut of oil equivalent to what triggered the 2014 oil crisis.

Compound annual growth rates as high as 60 percent can’t hold up for long, so it’s a very aggressive forecast. BNEF takes a more methodical approach in its analysis today, breaking down electric vehicles to their component costs to forecast when prices will drop enough to lure the average car buyer. Using BNEF’s model, we’ll cross the oil-crash benchmark of 2 million barrels a few years later—in 2028.

Predictions like these are tricky at best. The best one can hope for is to be more accurate than conventional wisdom, which in the oil industry is for little interest in electric cars going forward.

“If you look at reports like what OPEC puts out, what Exxon puts out, they put adoption at like 2 percent,” said Salim Morsy, BNEF analyst and author of today’s EV report. “Whether the end number by 2040 is 25 percent or 50 percent, it frankly doesn’t matter as much as making the binary call that there will be mass adoption.”

BNEF’s analysis focuses on the total cost of ownership of electric vehicles, including things like maintenance, gasoline costs, and—most important—the cost of batteries.

Batteries account for a third of the cost of building an electric car. For EVs to achieve widespread adoption, one of four things must happen:

1. Governments must offer incentives to lower the costs.
2. Manufacturers must accept extremely low profit margins.
3. Customers must be willing to pay more to drive electric.
4. The cost of batteries must come down.

The first three things are happening now in the early-adopter days of electric vehicles, but they can’t be sustained. Fortunately, the cost of batteries is headed in the right direction.

There’s another side to this EV equation: Where will all this electricity come from? By 2040, electric cars will draw 1,900 terawatt-hours of electricity, according to BNEF. That’s equivalent to 10 percent of humanity’s electricity produced last year.

The good news is electricity is getting cleaner. Since 2013, the world has been adding more electricity-generating capacity from wind and solar than from coal, natural gas, and oil combined. Electric cars will reduce the cost of battery storage and help store intermittent sun and wind power. In the move toward a cleaner grid, electric vehicles and renewable power create a mutually beneficial circle of demand.

And what about all the lithium and other finite materials used in the batteries? BNEF analyzed those markets as well, and found they’re just not an issue. Through 2030, battery packs will require less than 1 percent of the known reserves of lithium, nickel, manganese, and copper. They’ll require 4 percent of the world’s cobalt. After 2030, new battery chemistries will probably shift to other source materials, making packs lighter, smaller, and cheaper.

Despite all this, there’s still reason for oil markets to be skeptical. Manufacturers need to actually follow through on bringing down the price of electric cars, and there aren’t yet enough fast-charging stations for convenient long-distance travel. Many new drivers in China and India will continue to choose gasoline and diesel. Rising oil demand from developing countries could outweigh the impact of electric cars, especially if crude prices fall to $20 a barrel and stay there.

The other unknown that BNEF considers is the rise of autonomous cars and ride-sharing services like Uber and Lyft, which would all put more cars on the road that drive more than 20,000 miles a year. The more miles a car drives, the more economical battery packs become. If these new services are successful, they could boost electric-vehicle market share to 50 percent of new cars by 2040, according to BNEF.

One thing is certain: Whenever the oil crash comes, it will be only the beginning. Every year that follows will bring more electric cars to the road, and less demand for oil. Someone will be left holding the barrel.