More and more Fortune 500 companies are emerging as major customers of American clean energy and, according to a new report released from the American Wind Energy Association (AWEA) today, we now know what, where and how they are buying. 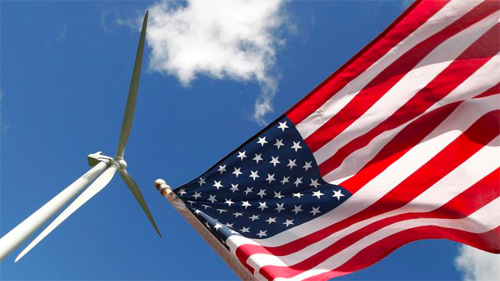 “In recent years Fortune 500 companies have led an intense search for the best ways to buy more clean energy,” said Tom Kiernan, AWEA CEO. “And when big-named brands buy clean energy, they overwhelmingly choose wind because of our reliable, low cost. Survey after survey shows Americans want more wind, and we want them to know brands behind the well-known products they buy — Amazon, General Motors, Google, Walmart and many more — are already wind powered.”

Fortune 500 companies awakened to the potential of purchasing low-cost, reliable renewable energy in the last four years. Recently, major corporate renewable energy announcements have flooded in: Google announced it will run entirely on renewable energy in 2017, and 95 percent of that will come from wind. General Motors will use wind to power a Texas factory that makes 1,200 SUVs a day like the Tahoe and Escalade. Eighty-three companies including GM, along with Amazon, Microsoft, Mars, and others have committed to go 100 percent renewable.

AWEA’s new report Evolution of the Corporate Wind PPA: Market Insights looks behind the recent headlines. The report reveals how America’s leading brands are powering their business with wind, publishing never before collected details on corporate power purchase agreements, or PPA for short. PPAs, essentially long-term contracts to buy energy, are a tool that many companies use to buy renewable energy from a specific wind or solar project.

AWEA researchers surveyed 23 companies who have signed PPAs to power their business.

“Wind power is the energy source of choice among these companies by a factor of six to one. That’s because you can get a lot of it, cheaply, through stable long-term contracts called PPAs,” said Hannah Hunt, lead author of the report and Senior Analyst for AWEA. “Wind power is a great deal, providing some of the least expensive electricity out there. With no fuel cost, buyers know up front what price they will pay for wind energy 10 or 20 years down the road.”

Companies have procured approximately 5,000 megawatts (MW) of wind through PPAs, out of a total 6,002 MW purchased from specific wind projects. The remaining 1,002 MW were acquired through direct ownership or other means. In total, through PPAs and other methods, corporate customers have acquired 6,002 MW of wind and around 1,000 MW of solar through November 2016.

“Members of the Fortune 500 know how to get results and they have applied that mentality to clean energy,” said Hunt. “We now know how and where they have gone about buying 5,000 megawatts of wind power through PPAs.”

“The bulk of wind projects built to serve the Fortune 500 are located from Texas, up through the rural heartland and across the Rust Belt,” Hunt explained. “That’s where some of the best wind resources are. It also happens to be part of the country hurting for jobs and private investment.”

“When these companies invest in a wind farm, they invest in a community,” said Hunt. “For example, when Iron Mountain brought a data center to southern Pennsylvania, they also invested in a wind farm in the state — that’s two multi-million dollar boosts into the Rust Belt economy where previously there was one.”

Generally speaking, companies need a lot of energy to power their retail stores, manufacturing facilities and data centers. Roughly 80 percent of wind capacity purchased by corporate customers is located in the same electricity market where at least some of the companies’ demand comes from.

“American companies aren’t standing by waiting for clean, cost-effective energy,” Hunt said. “They have applied market-leading innovation to develop new financial tools — including virtual power purchase agreement — that get projects built where they otherwise might not be.”

Power purchase agreements, PPA for short, are fundamentally contracts to buy energy. AWEA’s research found that many corporate customers are moving from traditional “physical” PPAs, where energy is delivered directly along power lines, to virtual PPAs which are financial transactions. This flexibility allows companies to invest wind and other clean energy projects in parts of the country where they wouldn’t have been able to do so before due to regulatory limits.

For more information about the structure of virtual PPAs and AWEA’s new report visit: http://www.awea.org/evolution-of-corporate-wind-ppa-market-insights