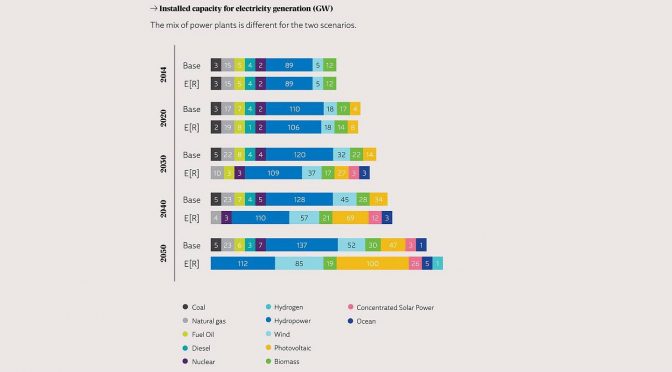 On behalf of Greenpeace International, researchers at the German Aerospace Center (Deutsches Zentrum für Luft- und Raumfahrt; DLR) have analysed what the energy supply in Brazil could be like by 2050 if the accelerated expansion of renewable energies and efficiency measures can be structured in a sustainable manner. The study, conducted within the framework of the Energy [R]evolution project series presents decision-makers in industry, policy and society the routes that can be taken, and actions that must be initiated in order to convert energy supply 100 percent to renewable resources, and thus reduce the associated emission of carbon dioxide to zero. 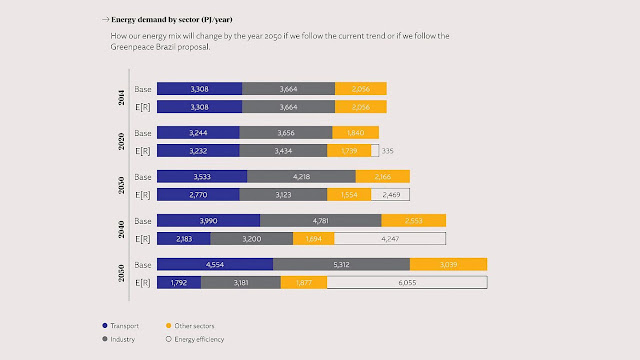 In the study, energy systems analysts from the DLR Institute of Engineering Thermodynamics developed and compared two scenarios: the progressive Energy [R]evolution scenario, and the conventional reference scenario. The Energy [R]evolution scenario is goal-oriented. The end result is an energy system that dispenses entirely with nuclear power and fossil fuels and that is as sustainable as possible. In contrast, the reference scenario continues to reflect current developments in industry and policy. Both scenarios assume a population growth from 200 million inhabitants today, to 230 million in 2050. They also estimate an average economic growth of two percent. 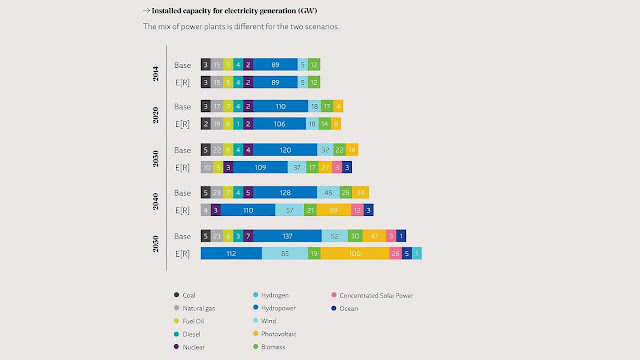 The first main difference between the two scenarios relates to their assumed total energy demand, which must be provided reliably by the energy supply system in future. “In the reference scenario, we expect a rise in energy demand of 43 percent by 2050. The demand in the Energy [R]evolution scenario dropped by 24 percent during the same period, above all due to a consistent implementation of efficiency measures,” summarises study leader Sonja Simon.

The expansion of wind and solar energy in particular is extremely dynamic in the progressive scenario. This trend compensates for the lack of electricity generated from nuclear power and fossil fuels, so that 99 percent of the energy used at the end of the study period comes from renewable resources. A remarkable aspect is how quickly it is possible to convert the electricity sector. Starting with the current share of 73 percent, obtained mainly from hydroelectric power stations, the proportion of renewables rises very quickly despite the increasing demand: their share already reaches 83 percent in 2020, climbing to 92 percent by 2030. The heat and transportation sectors will also convert to renewable energies, primarily obtained from biomass and green electricity, by 2050.

Of the installed power stations, hydroelectric systems still account for one third of the total capacity in 2050, while photovoltaic systems and wind turbines each contribute one quarter. Biomass and solar thermal power contribute six or eight percent of the energy demand. The DLR researchers do not believe that there is a systemic need for electricity storage units. But they do assume that an expansion in the supply grid will be necessary in order to increase transport capacities by a third. These infrastructure measures will be used above all to connect the wind turbine facilities built in the north-east with the centres of consumption in the south-east of the country, where over half of the national demand is centred. “Electricity transport between the Brazilian regions is an important aspect of the progressive scenario. Almost 40 percent will be transported across at least one region due to the clear dislocation between the demand and generation structures,” explains DLR scientist Hans Christian Gils.

Researchers believe that electricity costs will reach 8.5 US-cents per kilowatt hour in 2050. The Energy [R]evolution scenario ultimately cuts carbon dioxide emissions at the end of the study period to zero due to the complete abandonment of fossil fuels. In contrast, emissions rise by 10 percent in the reference scenario.

“Our scenarios are not forecasts – they are tools, intended to provide decision-makers with an overview that is as accurate as possible and that indicates possible developments and alternatives,” explains Christoph Schillings, head of the Systems Analysis and Technology Assessment department at the DLR Institute of Engineering Thermodynamics in Stuttgart. Among other things, the scientists used DLR’s proprietary energy system model REMix (Renewable Energy Mix for Sustainable Electricity Supply): researchers can use the system to find out which combination of technologies is best suited to generate energy from renewable resources so that a certain electricity demand – also in the sectors of transportation and heat – can be met as cost-effectively as possible. For this purpose, the model incorporates data on the various technologies and on storage systems, the opportunities of demand side management, electricity transport and the remaining conventional power plant capacities. This information is complemented by high-resolution, temporal and regional data on a country’s specific climate and weather, on the technical-economic framework conditions, as well as other scenario data. The DLR energy scientists cooperated with the Energy Planning Program (COPPE) at Universidade Federal do Rio de Janeiro in order to apply the REMix model to Brazil. A close cooperation has existed between COPPE and DLR since November 2015, aimed at promoting scientific networks between energy systems analysts from Brazil and Germany.