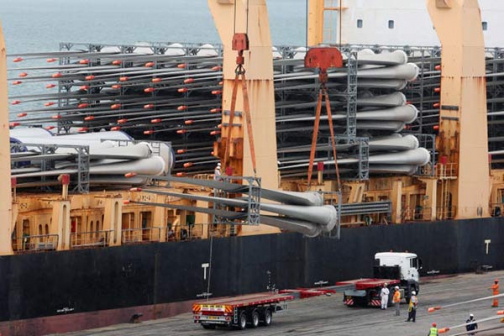 Lake Turkana Wind Power Ltd (LTWP) has started testing the turbines at its Marsabit wind farm for power generation.
The company is gearing up to start feeding the national grid with electricity next year. It expects to generate an initial 90 megawatts (MW) by the second quarter of the year before reaching full capacity of 310MW by June.
The wind farm is expected to play a critical role in reducing power costs in the country by increasing the amount of cheap electricity generated from renewable energy sources.
LTWP’s general manager, Phylip Leferink, said the company has installed 40 per cent, or 155 of the 365 turbines it needs, and had started testing them. Once completed, the project will be the largest wind farm in Africa.
“The Vestas turbines are already being tested for power generation. We expect to complete the installation process of the full wind farm by June 2017, with a turbine being installed daily,” said Leferink.
“By managing to hoist these turbines within the stipulated time, the team has not only achieved a technological feat, but also navigated through a logistical challenge of getting all the turbines in Loiyangalani, which is 1,200 kilometres from the port of Mombasa. This is a clear demonstration that we are on course to launch the largest wind farm in Africa on time.”
LTWP has a 20-year deal to sell electricity at Sh8.6 per kilowatt/hour (kWh) to Kenya Power from its Marsabit farm, which sits on 40,000 acres in an area that receives steady wind throughout the year. The power will be evacuated and transmitted to the national grid through a double circuit 400-kilovolt, 428-kilometre transmission line currently being constructed by the Kenya Electricity Transmission Company (Ketraco). 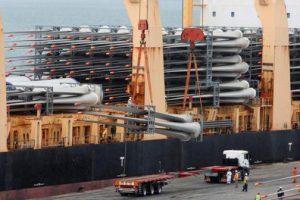 Some of the wind turbines being off-loaded from the MV Kota Bakti at the port of Mombasa soon after the ship docked on April 13, 2016. The wind turbines will be off-loaded and transported by road to Turkana for the Lake Turkana Wind Power project. [PHOTO BY GIDEON MAUNDU/STANDARD].

Other wind power projects that are in the pipeline include Kipeto Energy Wind Park (in Kajiado County), Kinangop Wind Park (Nyandarua County) and the planned Mount Meru Wind park (Meru County). KenGen is also undertaking expansion of its Ngong Wind Park. Some of these projects have faced delays due to a mix of challenges that include land acquisition.
German development agency GIZ adds that inadequate transport infrastructure in areas with high potential for wind power plants has also slowed project implementation. “High potential areas tend to be far from electricity demand centres. Security in reaching these areas can be of concern.
The supply of auxiliary equipment, related services and the availability of technical know-how concerning wind generation is also limited,” GIZ said in a recent brief on wind power in Kenya. The country, which relies heavily on renewables such as geothermal and hydro-power, aims to expand installed capacity to more than 6,000 MW by next year through the commissioning of more power plants. The country had an installed power-generating capacity of 2,333 megawatts by the end of last year, an increase from 1,800MW in 2013.
www.standardmedia.co.ke