Mainstream Renewable Power will develop, build and operate, together with local and international developers, three wind projects with a combined capacity of approximately 940MW. The exchange of a wind energy cooperation agreement was witnessed today by Irish President Michael D. Higgins and Vietnamese President Tr?n ??i Quang at the Presidential Palace in Hanoi, Vietnam during President Higgins’ State visit to Vietnam. The ceremonial exchange was organised by the Embassy of Ireland in Hanoi and Enterprise Ireland. 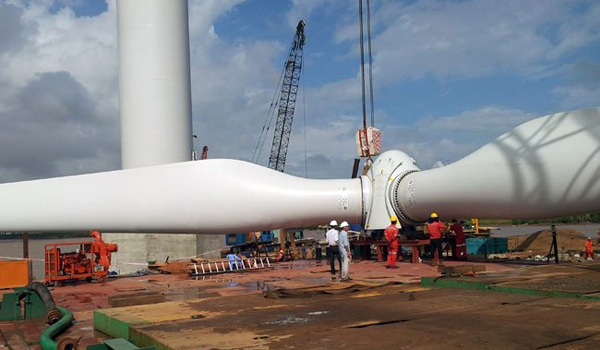 The 800MW Phu Cuong Wind Farm, a project with an investment injection of approximately US$2bn, will be executed in partnership with GE Energy Financial Services. Both Mainstream and GE Energy Financial Services have agreed to jointly acquire a share in the project as part of a term sheet that was signed in September between the two companies, which foresees them building 1GW of wind farms in Vietnam. The project is with local partner Phu Cuong Group, which will remain involved in the project and its five development phases.

The Phu Cuong project is located in the Soc Trang Province in Vietnam and the first phase, 150-200MW, is expected to reach financial close in 2018.

The Thai Hoa Wind Farm (83MW) and the Thai Phong Wind Farm (55MW) are located in the Binh Thuan Province in Vietnam, with a combined investment injection of approximately US$200m. Mainstream will acquire a share of the projects together with Pacific Corporation, the original developer. The first phase of this project is anticipated to reach financial close in 2018.

Commenting on the announcement, Mainstream’s Chief Operating Officer Andy Kinsella, said: “In terms of energy needs and requirements, Vietnam is one of the fastest growing markets in South East Asia. Through our global experience, Mainstream is well-equipped to deliver high quality, low-cost renewable energy thus assisting the Vietnam Government increasing its renewable energy usage by 2020 and beyond. Investing in Vietnam is very much aligned with our aim of developing large scale renewable energy projects in high-growth economies with significant demand for new-build power generation.” The agreements in Vietnam mark Mainstream’s first large scale investments in Asia, following the establishment of gigawatt scale portfolios in South America and Africa.

Vietnam is committed to the COP 21 agreement signed in Paris in late 2015, and as a result is dedicated to the development of renewable energy at scale in the form of wind and solar. The Vietnamese Government has set out targets of generating 800MW by 2020 and 6,000MW by 2030.

Mainstream recently announced the launch of Mainstream Renewable Capital, which has been established as the company’s finance and investment arm, creating custom-made opportunities for investors to gain exposure to Mainstream Renewable Power’s multi-gigawatt portfolio of wind and solar assets in regions such as Vietnam, Chile and Africa. The company has appointed veteran energy banker and investor Jim McGinnis as CEO to lead the new financing and investment arm.