Wind turbines could soon supply most of the UK’s electricity, the boss of the country’s largest wind farm operator has said, as he confirmed plans to sell its oil and gas division.

Dong Energy said the sale would underpin its plan to become a “global leader in renewables”, 44 years after the company was set up to exploit Denmark’s North Sea oilfields.

The chief executive pointed to the tumbling cost of green energy as evidence that wind and solar could supplant fossil fuels quicker than expected.

“When you look back in 10 years from now, we’ll see this period around 2016-17 as an inflection point,” Henrik Poulsen said. “The cost of offshore wind, also solar and onshore wind, is coming down at such speed that nobody could have predicted.”

Poulsen said technological advances in the energy industry meant wind power could end up supplying more than half of the UK’s electricity demand.

“When you combine different things, you could see offshore wind’s total of the energy mix going a lot higher,” he said. “You could definitely go above 50%.” He cited the falling cost of wind power, coupled with rapid progress in battery storage technology.

Wind power is often criticised for its intermittency, in that it cannot be relied upon to meet the UK’s energy needs because the wind does not always blow. But improvements in battery storage will mean surplus wind energy can be stored for release on windless days.

“There is plenty of room for additional offshore wind capacity in the UK and we would love to play a role,” said Poulsen.

Dong Energy confirmed it was seeking buyers for its North Sea oil and gas business, and Poulsen said the decision was more than simply financial. “The company has an ambition of leading the energy transformation of leading the transition to renewables,” he said. “That’s been driving us for the past few years and we see this as the natural step to transforming to be fully focused on green energy.” 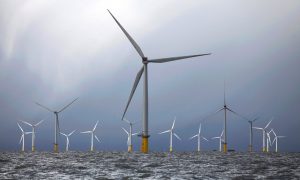 He said the sale had nothing to do with the fact that oil prices have been stubbornly low for two years. “It’s a matter of vision and strategy and not the oil price,” he said.

The company is “engaging with potential interested buyers”, said Poulsen, insisting that a glut of oil assets for sale would not hamper the process. He said the division had already sold less profitable, high-cost assets that would have made it less attractive to a buyer.

Poulsen was speaking as Dong Energy released third quarter figures that showed a jump in profit to £400m, compared with just £55m last year. Much of the improvement came from proceeds of the sale of Dong’s gas distribution grid in Denmark.

During the quarter renewables overtook oil and gas as the company’s biggest source of earnings, accounting for 42% of operating profit.

Despite the sale of its oil business, the firm has no plans to change its name, which is short for Dansk Olie og Naturgas (Danish Oil and Natural Gas).