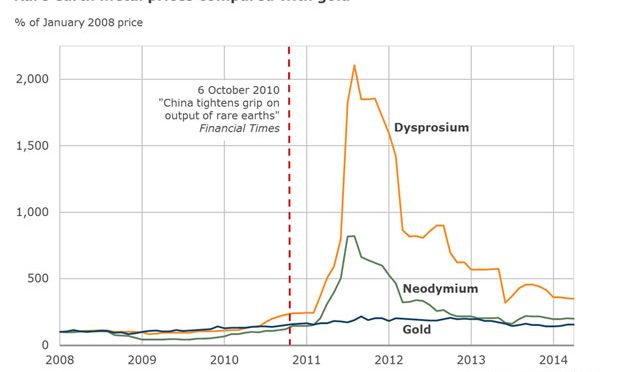 Supply of some rare earths is far greater than that of others as a result of production methods and there is a discontinuity between supply and demand across the different elements.  Despite growth in catalyst (and, to a lesser extent, polishing and nickel metal hydride battery) demand, cerium and lanthanum will remain in substantial surplus to 2026.  Demand for neodymium, however, is beginning to outstrip supply.

Rapid growth expected from permanent magnets, but will it be short-lived?

In the short-term to 2021, neodymium-iron-boron (NdFeB) magnet demand is forecast to grow strongly.  The traditional consumer electronics and automotive sectors account for the majority of NdFeB demand, but these magnets will experience strong growth from the emerging green technologies of wind turbines and new energy vehicles (NEVs).

Between 2016 and 2021, global NdFeB magnet production is forecast to grow by 4-5%py.  Global NEV production could rise by 3.5-4.0M vehicles, while global wind power installations could increase by 0.4M MW according to Roskill’s new rare earth report.  Chinese NEV consumption will see high growth rates as these vehicles are exempt from city number plate lotteries.  The Chinese government is also offering a range of tax cuts and purchasing incentives to encourage the uptake of NEVs.

As a result of increasing consumption, neodymium is expected to fall into deficit in 2016, although demand will initially be met by the drawdown of stocks.  The deficit is forecast to increase to 2021, making continued growth of NdFeB magnets unsustainable, despite efforts by rare earth producers to increase neodymium supply.

The neodymium price will rise towards the point of inflection, above which, magnet consumers will begin to replace NdFeB magnet technologies with substitutes.  The green energy sector is the most vulnerable to price rises because of the large size of magnets used.  Technologies already in use in this industry as an alternative to permanent magnet motors include induction motors in NEVs and induction/synchronous generators in wind turbines.

By 2021, it is expected that the high price of neodymium and concerns over supply availability will make projected growth rates of NdFeB demand unsustainable and demand for NdFeB magnets will fall rapidly from 2022, before stabilising at a much lower growth rate.  Overall, NdFeB magnet growth between 2021 and 2026 is forecast to be flat, possibly falling by up to -1%py.

Demand for dysprosium will also grow from the use of magnets in high temperature applications (including NEVs) but manufacturers are actively trying to reduce dysprosium-containing magnet consumption wherever possible and to develop new ways to reduce intensity of dysprosium use.  Little to zero dysprosium is consumed in wind turbines; maximising airflow allows for a lower operating temperature in this application.

The price of neodymium (and, to a lesser extent praseodymium and dysprosium) will rise with increasing NdFeB magnet demand to 2026.  The price for most other rare earth elements, however, will decline over this period.  Lanthanum and cerium prices will be limited by surplus supply.  Prices for europium and terbium will fall considerably as demand from the phosphors industry continues to decline rapidly.  These two elements were previously perceived to be critical because of their high use and low availability.  The recent shift in the lighting industry, from fluorescent to LED lamps, however, has reduced demand for rare earth phosphors by around two thirds since 2011.

China still dominates and this isn‘t about to change

China dominates global rare earth supply, accounting for an estimated 88% in 2016.  China’s position weakened slightly in the 2010s as ROW production increased with the start of mining by Lynas in Australia and by Molycorp in the USA.  Molycorp has since declared bankruptcy and closed its operations in 2015.

Low prices for most rare earths to 2026 will discourage investment in new projects and the rare earth industry in the ROW is not expected to see a significant injection of new capacity.  Current producers may expand where possible to serve increasing neodymium demand.

Illegal mining remains one of the main threats to rare earth prices going forward.  The Chinese government has committed to reduce illegally sourced material by introducing a raw material tracing system and granting great powers to raid and prosecute illegal miners, separators and distributors.  Mining from unofficial sources accounts for 25-30% of global rare earth supply in 2016 and is mainly carried out in the south of China where a large number of companies extract small quantities of heavy rare earths.

The Chinese system of export quotas and taxes was scrapped in 2015 after China lost an appeal with the WTO.  Chinese exports of rare earth compounds, metals and alloys are expected to rise by 17,100t in 2016 but are unlikely to see a significant increase in future years as the vast majority of consumption takes place in China.  The Chinese government continues to encourage downstream processing and the export of manufactured goods over raw materials.  Some of the increase in 2016 may be a result of China filling the void left by Molycorp’s closure.