In 2015, the 25 biggest wind asset owners expanded their collective grid-connected wind capacity to 170 GW but lost market share. This was shown in a new market report by renewable energy consulting company MAKE (link is external). 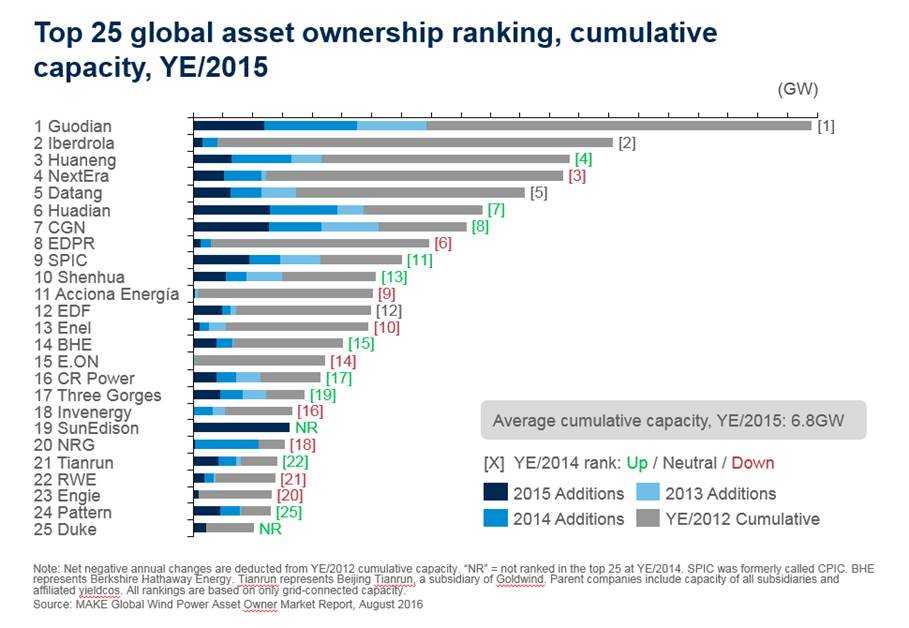 Overall, the top 25 owned 41% of global cumulative wind power capacity, a decline from 42% in 2014 and 47% in 2012. This is due to the fact that global ownership becomes more and more fragmented with smaller owners outside of the ranked top 25 acquiring existing assets.

A lot of those assets are in the European, Middle East and Africa regions (EMEA) and the Asia Pacific (APAC) regions. According to MAKE, some owners in Europe are starting to invest in growth markets more attractive than Southern Europe, such as the Americas (AMER) und offshore or onshore wind in Northern Europe.

With an average capacity addition of more than 1 GW the top 15 asset owners of the Chinese market set a new record in 2015. This growth enabled 8 owners in China to rise in the global top 25 ranking, and now 7 of the top 10 global asset owners are based in China with utility China Guodian on first place 1 and state-owned utility Huaneng on place 3 of the top list. Second place goes to Spanish utility Iberdrola.

Top owners lost market share in APAC and gained some in AMER The average compound annual growth rate (CAGR) in cumulative wind capacity of the China-based owners in the global top 25 was 29% from 2012 to 2015, compared to 21% for owners based in AMER and 3% in EMEA. Despite the growth by owners in the Asia Pacific region, the global wind capacity share of those owners in the Top 25 declined from 63% in 2013 to 55% in 2015. This indicates fragmentation in APAC, as owners outside of the top rankings gain share both in China and elsewhere in the Asia Pacific region, particularly in India.

The opposite happened on the American markets, especially in the U.S., where the largest asset owners have gradually increased their market share of wind assets. At the end of 2015, the owners within the Top 25 represented 51% of the AMER region’s 100 GW of installed wind power capacity.

Consolidation in the US market has been driven by a volatile policy environment and the rapid rise of yield cos – companies formed to own operating assets with a predictable cash flow. This favoured the largest asset owners and primarily IPPs. But these trends started to change during the second half of 2015, when rising interest rates and cost of equity slowed the growth of yield cos. MAKE expects utilities to gain share in the US market over the next 5 years with greater certainty of long-term policies.

You can find more information about the 60-page Report “Global Wind Power Asset Ownership” and how to order it on MAKE’s website (link is external).