Senvion, a leading global manufacturer of wind turbines, installed its first 3 megawatt (MW) machine in North America, the Senvion 3.2M114. The turbine has a rated output of 3.2 MW, hub height of 100 metres, and a rotor diameter of 114 metres. It is the first of 46 turbines to be installed at the Mesgi’g Ugju’s’n (MU) Wind Farm (a 50-50 partnership between the three Mi’gmaq Nations of Quebec and developer Innergex). The 3.2M114 has been in service in Europe since 2012, and has been specially adapted for North American requirements. The turbine is fully equipped with a hot air anti-icing system to be able to produce a maximum amount of yield even in harsh climates, and is one of the quietest turbines in its class. It is also the largest turbine to be installed to date in Canada. 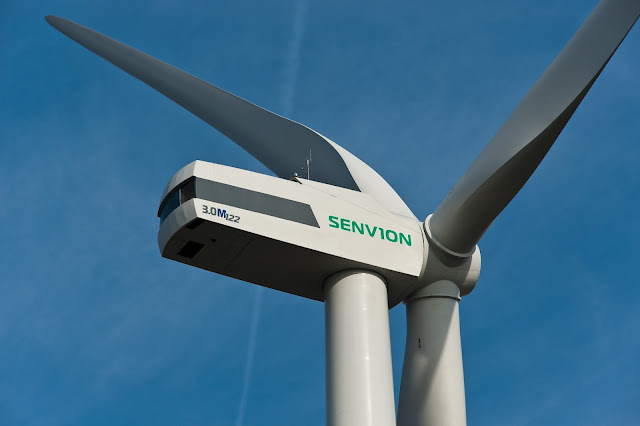 Helmut Herold, CEO of Senvion in North America, explains: “Senvion’s North American fleet is comprised of over 1100 MM92 turbines that have made us strong and successful across the continent. With the arrival and installation of the 3.2M114 we are adding and growing our North American portfolio but also showcasing how our high quality proven German technology specifically adapted for North America. A larger turbine such as the 3.2M114 is a more cost competitive option for developers and communities alike who seek innovative technology to help reduce project costs. Such technologies help, once more, to make wind one of the most cost-competitive choices for energy generation.”

Troy Jerome, MMS Executive Director-Nutewistoq and MUWF Chair, adds: “A Senvion 3.2 MW turbine – erected by our people in our territory – demonstrates our ability to have a Nation to Nation relationship and to come together as Mi’gmaq people to step forward for the betterment of our Mi’gmaq citizens.”

Michel Letellier, President and Chief Executive Officer of Innergex Renewable Energy, says: “As a partner in the Mesgi’g Ugju’s’n Wind Farm project, we are very pleased to be the first in North America to install the proven state-of-the-art technology of Senvion’s 3.2M114 turbines, which will contribute to optimizing the benefits of this project.”

Mesgi’g Ugju’s’n Wind Farm will see a fast-paced installation and execution between the early summer months until December 2016. Once completed the project of a total of 150 MW is expected to produce enough electricity to power over 30 000 homes in the Avignon regional Country of Quebec. It is the biggest wind farm project with First Nations participation in Quebec to date. The project was awarded a power purchase agreement in March 2014 and is expected to be commissioned by the end of 2016.

Senvion, a leading global manufacturer of wind turbines, today announced that Christoph Seyfarth, Chief Operating Officer (COO), is leaving the company by mutual agreement, effective 15 July 2016. The search for a suitable replacement is underway. Chief Executive Officer (CEO) Jürgen Geissinger will take on the COO responsibility until the appointment of a successor. “We thank Christoph Seyfarth for his contribution and wish him well for the future,” says Jürgen Geissinger.

Senvion is a leading global manufacturer of onshore and offshore wind turbines. The company develops, produces and markets wind turbines for almost any location – with rated outputs of 2 MW to 6.15 MW and rotor diameters of 82 metres to 152 metres. Furthermore, the company offers its customers project specific solutions in the areas of turnkey, service and maintenance, transport and installation, as well as foundation planning and construction. The systems are designed at the Senvion TechCenter in Osterrönfeld and manufactured at its German plants in Husum (North Friesland), Trampe (Brandenburg) and Bremerhaven, as well as Portugal. With approximately 3,900 employees worldwide, the company makes use of the experience gained from the manufacture and installation of more than 6,600 wind turbines around the world. The company’s operational subsidiary Senvion GmbH is based in Hamburg and represented by distribution partners, subsidiaries and participations in European markets such as France, Belgium, the Netherlands, the UK, Italy, Romania, Portugal, Sweden, and Poland as well as on a global level in the USA, China, Australia and Canada. Senvion S.A. is listed on the Prime Standard of the Frankfurt Stock Exchange.