The years of relentless research and development in the sector of wind power have made the industry highly sophisticated in the United States. According to a recent report released by the U.S. Department of Energy examining the overall state of clean energy technologies in the country, the swiftly rising stake of wind power in the country’s overall energy mix is highlighted. The report states that between 2008 and 2014, wind power accounted for a 31% share in the overall new power generation capacity added in the country. As of 2014, utility-scale onshore wind power production projects deployed across 39 states of the country had a combined capacity of more than 65,000 MW – enough to meet the electricity needs of more than 16 mn households. Projects that would add another 13,000 MW capacity were under construction by the first quarter of 2015. 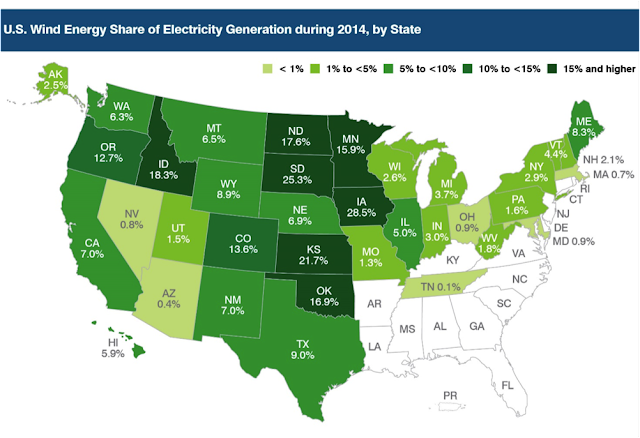 The Rise and Rise of Wind Power in the U.S.

Continued advancements in technology and the development of taller wind towers with longer blades and advanced turbines are making wind power more cost-competitive and efficient in the country. The U.S. DoE projects that owing to these developments, the wind power output of the country could rise by 67%.

Multiple factors, such as the DoE’s sustained investments in wind power for honing the technology and enabling the development of longer blades and taller turbines, and the installation of new transmission projects, have led to a significant reduction in wind power prices in the country over the past few years. From 7 cents per kWh in 2009 to an average of 2.4 cents per kWh in 2014, the sector of wind power has transformed into one of the most cost-effective power sources in the country. The excellent positioning of projects in the central part of the country is also a factor why wind power prices have become so affordable.

The rising coordination between grid operators and wind power producers has also improved the ability of the grid to accept higher levels of wind power. Federal policies are also assisting the increased deployment of investments in the U.S. wind power sector. Together, these attempts are assisting the development of the wind energy market in the U.S. and making wind power a larger contributor in the rapidly transforming U.S. energy production portfolio. With the favorable regulatory scenario, a continuous rise in investments for R&D activities, and newer projects being deployed on a regular basis, it will be no surprise if wind power accounts for the projected 20% share in the country’s overall electricity consumption by 2030.