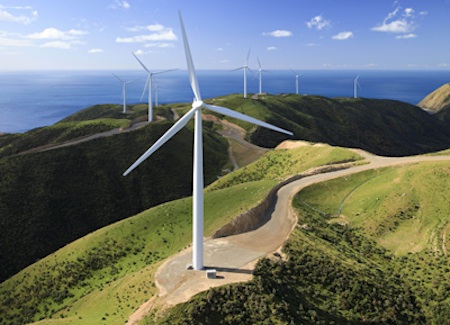 After the November Paris Climate Change Agreement, global leaders have called on New Zealand to cut fossil fuel generation capacity faster than its 2020 target and placed particular emphasis on solar and the wind.

Sehdehi blames this on the limited range of traditional wind generators.

Tradition wind systems can only work between 12.6km/hr and 90 km/hr says Sehdehi limiting operational capacity. “Any investors considering wind generation will find it difficult to get a reliable return due to the changeable nature of winds and the narrow band traditional wind turbines work in,” says Sehdehi.

“It makes it a hard sell when the units there can only harness a fraction of the available energy source.”

Rather than having turbines on poles in the air INVELOX systems place the turbines on the ground, using funnels to capture and direct air towards wind turbines.

Varying pipe widths in the system accelerate the wind utilizing the Venturi effect, a phenomenon used by Dyson airplane fans to deliver either cold or hot air to targeted areas.

The INVELOX system can generate electricity from winds blowing between 3.25km/hr and 216km/hr which dramatically increases availability according to Pacific Wind operations manager Payar Radfar as a result.

Radfar says not only can the INVELOX system produce power from a wider range of the wind it also costs 43% less to set up and produces power for just 2c/KWH.

“If New Zealand was to take advantage of that technology I think we would be able to retire all forms of non-renewable energy generation tools in the near future.”

“With this week marking the global week of the wind it makes sense to explore the new generation of wind generation technology.”