Ceara announced that is working to reduce by three months the waiting period for the environmental licensing of wind power projects. 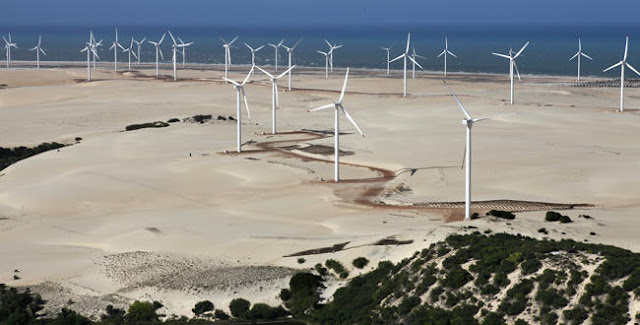 Wind farms in the the Brazilian state of Ceara enjoy the world’s highest capacity factor at 43.4% on average. Brazil’s average capacity factor for wind energy stands at 35.2% while globally the figure goes down to 28%.
Today, with 57 wind farms in operation and 1.5 gigawatts (GW) of installed wind power capacity, the state provides about 23,000 jobs (direct and indirect). In Brazil, the wind energy sector currently generates 145,000 jobs. And, according to data from June 2016 of the Brazilian Wind Energy Association (Abeeólica), the perspective is that until 2019 the State will reach 2.5 GW of wind power in 102 farms (in operation and under construction). The organization estimates that each MW represents 15 jobs throughout the chain of producción.
Throughout Brazil, the wind energy currently generates 145,000 jobs, 41,000 of which were created last year. And in 2019, the expectation is that the production of the wind industry reach the 277,000 jobs, with 18.4 GW of capacidad. After strong growth in 2015, the Chairman of the Board of Abeeólica, Lauro Fiuza, says that one of the concerns of the organization is to keep active for the wind industry to continue hiring auctions. “Our main concern today is to keep these jobs, including manufacturers, project developers and the whole chain of services, including transportation, installation and operation.” “This whole chain needs to be fed every year.” Fiuza said to develop wind turbines is dependent on a thousand manufacturers. “These works are mainly distributed in the Northeast. And for a poor region like Ceará means a lot.”In 2015, wind power accounted for 39.3% of the expansion of the Brazilian energy matrix, ahead of hydropower (35.1%), the main matrix of the country, and thermal energy (25.6%) .The increase of 46% of the installed wind power capacity last year, accounted for 2.75 GW of new facilities, so that the sector closed the year with 130,000 jobs throughout the supply chain. According to Abeeólica, the estimate of jobs created are given taking into account all phases of the park project, from project design to installation, including manufacture of parts and componentes. In 2015, the wind industry in Brazil reached 8.27 GW of installed capacity, representing a cumulative total investment of 52 billion reais.Today, wind capacity is 9.73 GW Brazil, distributed in 388 wind farms. In total, there are 5,141 wind turbines installed in Brazil. In the Northeast, the installed capacity of 7.90 GW, distributed in 306 wind farms and 4,204 wind turbines, which corresponds to 82% of wind turbines. 2.75 GW of wind power installed in 2015, 2.31 GW were in the northeast, and the states of Rio Grande do Norte, Bahia and Piaui are the most prominent.On June 24 Camilo Santana Governor will present the new wind map of Ceara. The document indicates the sites with the best wind conditions.
Ceara is among the leaders in terms of distributed microgeneration. In total, the northeastern state now has 20 wind systems with a installed capacity of 53.1 kW, which makes up for 26.2% of Brazil’s overall distributed generation capacity.
According to the national power sector regulator Aneel, Brazil currently has 368 wind farms in operation, or about 9 GW of installed capacity that produces 6.23% of the country’s energy mix.
http://santamarta-florez.blogspot.com.br/2016/06/la-eolica-debe-crear-15000-empleos-en.html
http://www.evwind.com/2016/06/16/la-eolica-debe-crear-15-000-empleos-en-ceara-brasil-para-el-ano-2019/