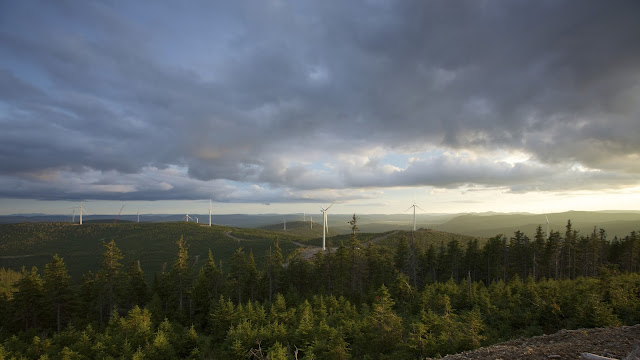 Located on public lands in the MRC of Haute-Gaspésie and MRC of Côte-de-Gaspé, Mont-Rothery generates enough clean electricity to meet the needs of about 15,000 Quebec homes.

With an investment of close to $175 million, the project created more than 200 jobs during the peak construction phase, and around seven permanent operation and maintenance jobs.

Sebastien Proulx, Minister of Education, Family, Recreation and Sports and Minister Responsible for the Gaspésie-Îles-de-la-Madeleine Region stated, “I am pleased to be here today with EDF Energies Nouvelles Canada and MD1 Wind to represent the Government of Québec for the investiture of the Mont Rothery wind farm. This project contributes to the economic prosperity of the region of Gaspésie. On account of our will to increase the use of renewable energy, we can rejoice to observe the dynamism of renewable projects such as the one in Murdochville.”

“Desjardins’ investments towards renewable energy in Quebec, as well as countrywide, is a long term commitment. They aren’t simply good business decisions, they are mainly contributions to the promotion of the economic growth of Quebec, and its region, in a domain that participates in the effort to reduce carbon emissions,” commented Frédéric Angers, Head of Infrastructure at Desjardins.

Richard Lee, Managing Director of Project Finance and Infrastructure at Manulife, said, “Manulife is very pleased to be part of this strong group with EDF EN Canada and Desjardins Group and being a part owner in this high quality renewable energy project. We view EDF EN Canada’s capabilities as an operator to be of the highest calibre and our close relationship with Desjardins is valued by us. We are also excited that we continue to expand our investment footprint in Quebec as it fits our company’s long term view to continue to expand our presence in the Province.”

Alex Couture, Director Generation for EDF EN Canada further added, “In addition to the $11 million of local economic impact generated by the project during construction, the two MRCs concerned by the project and the city of Murdochville will share a total contribution of over $4 million during the operational phase.”

The project consists of 37 wind turbines supplied by Senvion and made with regionally-manufactured blades, towers and converters. Construction of Mont Rothery commenced in October 2014 and reached commercial operation on December 1, 2015.

Desjardins Group is the leading cooperative financial group in Canada and the sixth largest cooperative financial group in the world with assets of $255.1 billion. It has been rated one of the Best Employers in Canada by Aon Hewitt. To meet the diverse needs of its members and clients, Desjardins offers a full range of products and services to individuals and businesses through its extensive distribution network, online platforms and subsidiaries across Canada. Considered North America’s strongest bank according to Bloomberg News, Desjardins has one of the highest capital ratios and credit ratings in the industry.

Manulife Financial Corporation is a leading international financial services group providing forward-thinking solutions to help people with their big financial decisions. We operate as John Hancock in the United States, and Manulife elsewhere. We provide financial advice, insurance and wealth and asset management solutions for individuals, groups and institutions. At the end of 2015, we had 34,000 employees, 63,000 agents, and thousands of distribution partners, serving 20 million customers. At the end of March 2016, we had $904 billion (US$697 billion) in assets under management and administration, and in the previous 12 months we made more than $24.9 billion in benefits, interest and other payments to our customers. Our principal operations are in Asia, Canada and the United States where we have served customers for more than 100 years. With our global headquarters in Toronto, Canada, we trade as ‘MFC’ on the Toronto, New York, and the Philippine stock exchanges and under ‘945’ in Hong Kong.