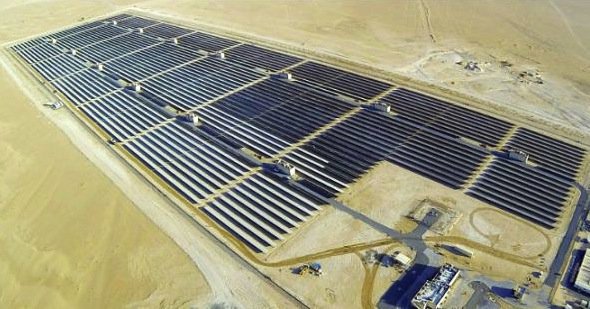 The project will be located in the Mohammed Bin Rashid Solar Park (MBR), the largest single-site solar power park in the world, according to the DEWA.

CSP, also called as solar thermal, generates power by using special mirrors to concentrate an area of sunlight onto a small area. The solar thermal energy can be transformed efficiently into electricity. Saeed Mohammed Al-Tayer, the managing director and CEO of DEWA, said CSP can be stored easily, “which makes it possible to produce electricity after sunset.”

The DEWA plan is in line with the directive by the  His Highness Shaikh Mohammed bin Rashid Al Maktoum, Vice President and Prime Minister of the UAE and Ruler of Dubai to provide seven percent of Dubai total power output from clean energy sources by 2020, 25 percent by 2030 and 75 percent by 2050.

The entire MBR will produce 5,000 megawatts by 2030 and the project will cut about 6.5 million tonnes of carbon emissions annually.

The DEWA said the projects aim to raise the total power output to 25 per cent.

In order to realise the ambitious projects, DEWA has submitted proposals to international CSP consultants for advisory services for the first CSP project of 200 megawatts to be completed by April 2021.