Today REN21 published the most comprehensiveannual overview of the state of renewable energy.
The Renewables 2016 Global Status Report reveals that renewables are now firmly established as competitive, mainstream sources of energy in many countries around the world.

2015 was a record year for renewable energy installations. Renewable power generating capacity saw its largest increase ever,
with an estimated 147gigawatts (GW) added
. Modern renewable heat capacity also continued to rise, and renewables use expanded in the transport sector. D
istributed renewable energy is advancing rapidly to close the gap between the energy haves and have-nots.
These results were driven by several factors. First and foremost,renewables are now cost competitive with fossil fuels in many markets. 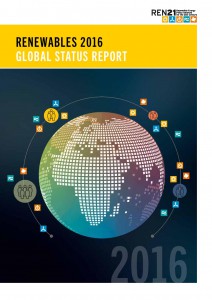 In addition, government leadership continues to play a key role in driving the growth of renewables, particularly wind and solar, in the power sector. As of early 2016, 173 countries had renewable
energy targets in place and 146 countries had support policies. Cities, communities and companies are leading the rapidly expanding “100% renewable” movement, playing a vital role in advancing the global energy transition.
Additional growth factors include better access to financing, concerns about energy security and the environment and the growing demand for modern energy services in developing and emerging economies.

It might have been a “tough year” all round for renewables in Australia in 2015, but on a global scale it was a record-breaker, according to the REN21 2016 Renewables Global Status Report, with 147GW of renewable generating capacity added worldwide, marking the largest year-on-year increase ever and taking the total global share of renewables to just under 20 per cent of final energy consumption.

The report, published on Wednesday, shows that wind energy was the leading source of new power generating capacity in Europe and the US in 2015, and the second largest in China, with a record global total of 63GW added for the year, taking the cumulative total to about 433GW.

This is because it is so cheap. Indeed, the report lists Australia as one of the many markets worldwide where wind power was the most cost-effective option for new grid-based power in 2015. You can see this trend reflected in all that blue in the graph below. The solar PV market was the second biggest contributor, up 25 per cent from 2014 to 50GW – another record – lifting the global total to 227GW. As a point of interest, the REN21 report notes that the annual solar PV market in 2015 was nearly 10 times the world’s cumulative solar PV capacity of a decade earlier. Another fun solar PV fact from the report is that Australia  – which makes the ranks of the year’s top 10 PV installers – ended the year with the equivalent of one solar panel per inhabitant. Concentrating solar thermal, meanwhile, grew its global capacity by 10 per cent in 2015, to a total of nearly 4.8GW, the report says, with Morocco (160MW), South Africa (150 MW) and the United
States (110MW) all bringing new CSP facilities online over the course of the year.

And global investment in renewables also climbed to a record new level of $US286 billion for the year – an amount that was achieved, the report notes, “in spite of the plunge in fossil fuel prices, the strength of the US dollar…, the continued weakness of the European economy” and further declines solar and wind costs. “This growth occurred despite tumbling global prices for all fossil fuels, ongoing fossil fuel subsidies and other challenges facing renewables, including the integration of rising shares of renewable generation, policy and political instability, regulatory barriers and fiscal constraints.”

And the growth was driven by a number factors, adds the report, the “first and foremost” being that renewables are now cost competitive with fossil fuels in many markets.

Below are the charts from the report ranking the top five countries on installation and investment. As you can see, China, the US and Europe feature strongly. Australia rates a few mentions in the report, most notably for making the top 10 countries for installation of rooftop solar PV (see chart below) – just one of the developed countries and regions alongside Europe, Japan and North America to have seen “significant growth in numbers of residential and industrial electricity customers who produce their own power.” Australia is also mentioned for its role in the global 100% Renewable Energy movement, with the addition in 2015 of new members including Byron Shire, Co?ffs Harbour and Uralla.

Elsewhere in the report, South Australia gained an honourable mention as one of several jurisdictions – including Denmark, Germany and some US states – to already have successfully integrated high shares of variable renewables into their electricity grids. The report notes that some electricity utilities have also managed to successfully integrate very large shares of renewables over short time periods. Another important mention is given to Australia on the subject of behind-the-meter battery storage – a sector which the report says “took a great step forward in 2015 with some high profile announcements” and a host of companies competing for a small but rapidly growing market.

“Such markets are developing in Australia, Germany, Japan, parts of the United States and elsewhere, particularly in combination with small-scale solar PV,” it said.