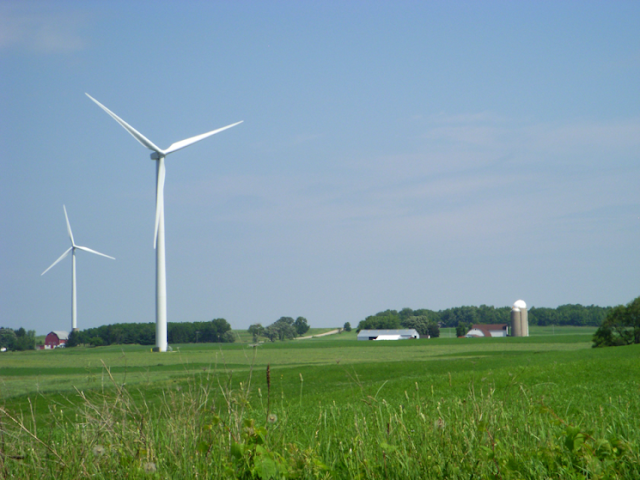 Wind added 520 megawatts (MW) of new electric generating capacity to the power grid from January through March, according to AWEA’s U.S. Wind Industry First Quarter 2016 Market Report, released today. Construction started on another 2,000 MW, with a total of more than 10,100 MW of wind capacity now under construction.

“Our productive first quarter reflects the strength of American wind power entering 2016. We have a low-cost product that’s in high demand,” said Tom Kiernan, CEO of AWEA. “As the wind business builds momentum, we’re prepared to double wind’s contribution to America’s electricity supply in the next five years.”

There are now more than 48,800 wind turbines operating in 40 states plus Puerto Rico and, for the first time, Guam – enough to power 20 million average homes with 74,512 MW of total installed capacity. Turbines were installed at seven projects across six states this quarter; Oklahoma led the country with 270 MW of wind capacity installations, followed by Iowa (154 MW), Utah (62 MW) and New Mexico (32 MW).

More wind power is on the way. Construction starts in the first quarter bring the total to 10,100 MW now under construction, with an additional 5,100 MW in advanced stages of development and nearing construction.

The Department of Energy Wind Vision report, released last year, shows that wind power can double in the next five years to supply 10 percent of U.S. electricity demand by 2020 and double again to reach 20 percent by 2030.

The newest quarterly market results follow the release of AWEA’s 2015 U.S. Wind Industry Annual Market Report, which highlights the growing demand for wind energy in 2015. The cost of wind power has fallen by two-thirds since 2009, helping to make wind energy the electricity source of choice for American states, utilities and other emerging buyers. Last year, wind installed the most new electric generating capacity nationwide (at 41 percent), followed by solar (28.5 percent) and natural gas (28.1 percent).

Low costs have prompted strong growth in wind investment by Fortune 500 companies and other emerging buyers, through long-term contracts called power purchase agreements (PPAs). The Department of Defense joined Fortune 500 companies 3M and Salesforce, among others, to contract for 246 MW of wind in the first quarter, over a third of the capacity purchased in 2016’s first three months.

With traditional utility buyers included, more than 660 MW of PPAs were announced during the first quarter of 2016, contributing to the more than 4,500 MW of PPAs signed since the beginning of 2015.

Project developers and manufacturers are also investing in new technology to produce turbines that reach steadier, more powerful winds at greater heights – opening new areas to be developed economically. America’s tallest operating wind turbine can now be found in Iowa. The 154-MW Adams wind farm, completed in the first quarter by MidAmerican Energy, includes one prototype wind turbine – designed and supplied by Siemens – that uses an innovative concrete tower design to reach a record-breaking hub height of approximately 115 meters with a rotor diameter of 108 meters.

“This is the first concrete tower project for Siemens in North America, we’re proud to say the tower technology was conceived, designed, engineered, and constructed entirely in the United States,” said Michael McManus, Head of Business Development and Strategy for Siemens Americas Onshore Wind. “This project marks another milestone in our successful partnership with MidAmerican Energy to expand clean, renewable wind power in Iowa, and demonstrates Siemens’ continuous dedication to innovation to drive down the cost of wind energy around the globe.”

Turbine manufacturers reported over 800 MW of new orders in the first quarter, keeping American factories humming. The wind industry supported 88,000 jobs in the U.S. at the start of the year – an increase of 20 percent from 2014 – including over 21,000 jobs manufacturing wind turbine parts and materials at more than 500 factories across 43 states.

Many states and utilities are moving forward with their plans to cut carbon pollution despite the Supreme Court stay of EPA’s Clean Power Plan. Wind energy is the biggest, fastest and cheapest way for states to cut carbon pollution and comply with the plan, according to analysis of EIA data – and states that add wind energy now can benefit from increases in jobs and consumer savings ahead of the initial Clean Power Plan compliance period in 2022.

Building long-distance transmission infrastructure is another key part of America’s clean energy future. Adding transmission capacity helps move low-cost wind energy to cities where it’s needed most, saving consumers money and increasing the resilience of the electricity grid. Working with local authorities to develop clear siting laws is also vital to making sure that wind projects can be sited efficiently and to the benefit of local communities.

Members of the press can learn first-hand about the next generation of American wind energy at this year’s WINDPOWER Conference & Exhibition in New Orleans, May 23-26. Attendees can network with industry leaders at the largest wind power trade show in the Western Hemisphere. Registration and press accreditation is now open.