Nearly 1.2 million homes in Brazil will have to generate their own energy from renewable energy sources by 2024.  A study by the National Electric Energy Agency predicts that homes equipped with solar panels or mini wind turbines will be able to generate electricity for household consumption, and transfer any surplus to a local distribution center. 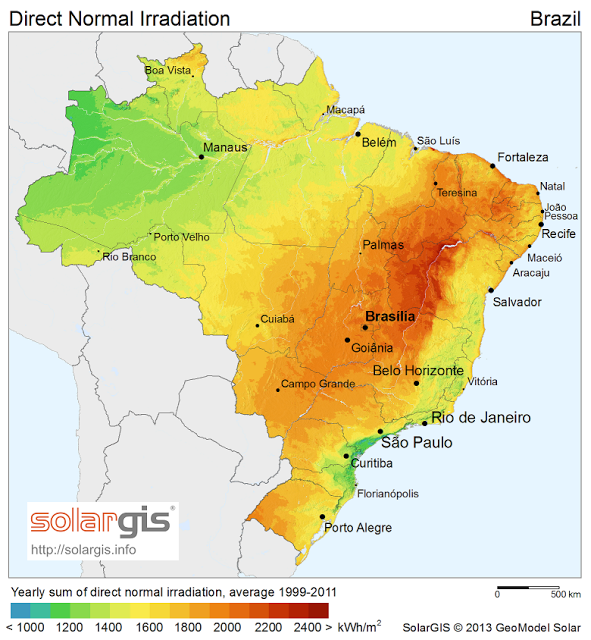 The new regulations allow a group of people to form a cooperative to generate green electricity and reduce their collective energy costs.

Consumers can also generate power at a different location from where they intend to use it, such as producing energy at a country house for use at an apartment in the city.

If the energy produced in a month exceeds the amount consumed, the customer will receive credits that can be used for next month’s bill.

Between 2014 and 2016, the number of homes or sites across Brazil that joined the OSG system grew fourfold, going from 424 to 1,930, and officials expect that number to rise further in the future. Some 90 percent of homes connected to the OSG system are solar powered.

Brazil’s solar power sector, which has gone through a significant growth in recent years, has welcomed Chinese firms’ participation in the industry.

There is a “clear trend” of establishment of Asian, especially Chinese, solar power companies in Brazil, said Rodrigo Sauaia, executive president of the Brazilian Solar Power Association (ABSOLAR) in a recent interview with Xinhua.

Chinese company BYD, for example, will build a solar panel factory at Campinas in Sao Paulo state in southeastern Brazil, he said.

According to Sauaia, Chinese companies are either setting up factories in Brazil or having plans to get settled in the country in order to participate in public bidding in the future.

Sauaia believed it is a good time for foreign companies to invest in Brazil amid depreciation of the real against the U.S. dollar, which stands at around 3.80 reals per dollar.

Sauaia highlighted the perspective of market growth for the photovoltaic modules over the coming decades in Brazil.

“The technical potential of solar energy in Brazil is of at least 10,000 gigawatts, bigger than the sum of all other power sources,” he said.