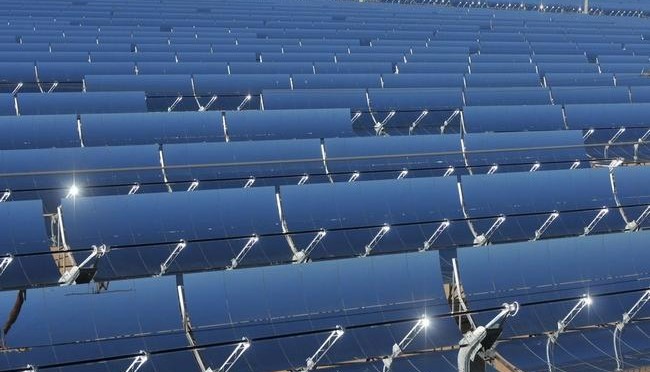 New report shows that solar thermal electricity could meet up to 6% of the world’s power needs by 2030 and 12% by 2050 while creating millions of jobs. 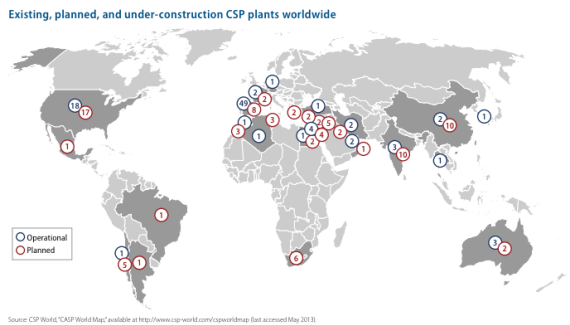 Solar thermal electricity (STE) could supply as much as 12 percent of the world’s power needs by 2050, given the right conditions, according to a new report.  The report, Solar Thermal Electricity Global Outlook 2016, 4th Edition, is released today by Greenpeace International, SolarPACES and ESTELA (European Solar Thermal Electricity Association). It also shows how STE could create millions of jobs.
“This report makes clear that STE is key to achieving a world powered by 100% renewable energy by 2050, which is essential if we are to protect the climate,” said Dr Luis Crespo, President of ESTELA. “The importance of STE is its ability to harness the sun to provide round-the-clock energy, even when the sun isn’t shining. It unlocks a future of emission-free energy in sun-belt countries around the planet.”
The annual market volume for STE hit the one billion US dollar mark in 2009. Whilst the installed capacity of STE in 2006 was only 0.5 GW, it has increased by a factor of 10 to almost 5 GW today. The STE sector is heading towards double digit GW capacity within the next five years. It’s now essential that the European Union, the United States, Australia and other regions act to remove barriers that prevent STE projects from obtaining financing, for example, so that STE reaches its full potential.
That potential can be seen in the Moroccan project, Noor 1, which is officially opened today (Feb 4). This 160 MW project has boosted the local economy and will cut Morocco’s emissions by 240,000 tons per year, according to estimates from the energy ministry. But Noor 1 is merely the first phase of the Noor STE project. Two more phases are planned and are already under development. Once completed, Noor will be the largest solar power production facility in the world at 580 MW.
“Noor 1 isn’t just a show-case for STE technology,” said M. Bial, ESTELA Secretary General. “It shows that countries like Morocco can be leaders in renewable energy, setting the country on a path that Europe should follow.
“The use of STE technology will bring huge benefits not only to Morocco’s electricity system and its users, but to the whole country’s economy.”
The Solar Thermal Electricity Global Outlook 2016 modelled several future scenarios for technology growth. Given favourable policy conditions for STE, along with a strong uptake of energy efficiency, the scenarios show that STE could employ as many as 2.7 million people by 2030, and deliver a significant share of the world’s electricity by 2050. STE could also reduce global CO2 emissions by more than 37 billion tonnes. That is equivalent to four years of CO2 emissions from China.
“This is an inspiring vision not just for our political leaders, but also millions of citizens around the world,” said Emily Rochon from Greenpeace International. “STE can boost local economies, provide a reliable energy supply and most importantly, reduce CO2 emissions. When world leaders signed the Paris Agreement in December, it was a recognition that the climate clock is ticking. We have to radically reduce emissions now. STE should be part of that process.”
Solar Thermal Electricity, also known as concentrating solar power, is a renewable energy technology that uses mirrors to concentrate the sun’s energy and convert it into high-temperature heat to create steam to drive a turbine that generates electricity. STE is a carbon-free source of electricity that is best suited to areas in the world with strong irradiation: Southern Europe, Northern Africa and the Middle East, South Africa, parts of India, China, Southern USA and Australia.
Executive Summary: Download | Full Report: Download
http://www.estelasolar.org/wp-content/uploads/2016/02/GP-ESTELA-SolarPACES_Solar-Thermal-Electricity-Global-Outlook-2016_Full-report.pdf
http://helioscsp.com/concentrated-solar-power-could-meet-up-to-6-of-the-worlds-power-needs-by-2030-and-12-by-2050/
http://helionoticias.es/la-termosolar-podria-satisfacer-hasta-el-12-de-la-demanda-global-de-electricidad-en-el-ano-205/