The year 2015 has closed as the darkest in the history of wind energy in Spain, with zero megawatts installed. This has not happened since the 80´s, when a shy development of the sector started in our country, which was accelerated in the 90´s and consolidated in the next decade, reaching 22,988 MW currently. Wind power production in the year was 47,721 GWh –5.8% below that of 2014–, and it covered 19.4% of electricity consumption, according to REE. 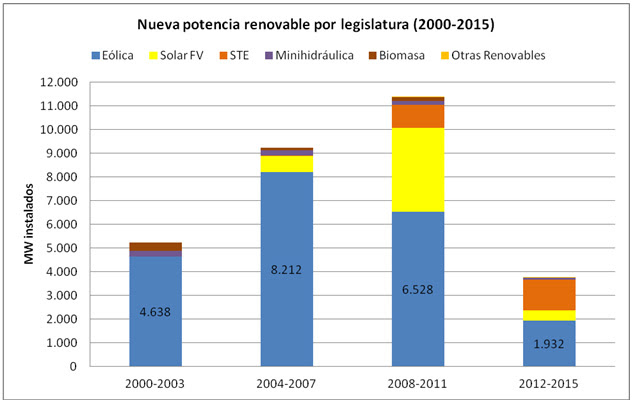 In the last four years, only 1,932 MW have been installed, which means that the last political term  was the least wind friendly by far since 2000, as a result of the green moratorium and the Government’s Energy Reform (see graph below). Moreover, since the launch of the new renewable support system in 2013, the sector has only installed 27 MW, 1.4% of the total capacity accumulated in the last legislature. In fact, the Spanish wind energy manufacturers have survived thanks to exports (in 2014 and 2015 the companies exported 100% of its production in Spain). 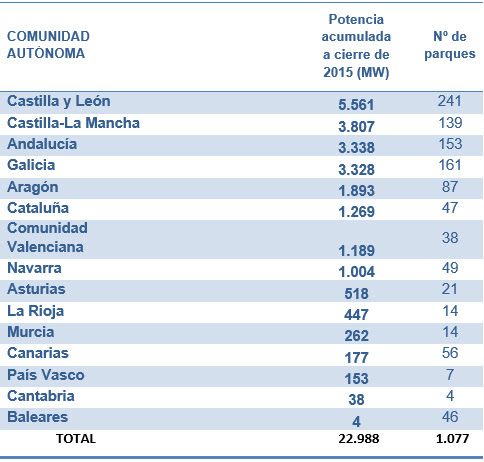 The main consequence of the sector’s paralysis is that Spain is far from the EU targets of energy consumption from renewable sources by 2020, which are binding. The only possibility is to take the appropriate steps to comply with the Government’s Energy Planning for 2020, which establishes in 6,400 MW the need of wind energy capacity to meet Europe´s targets. To meet the targets in such a short space of time, the Spanish Wind Energy Association (AEE) considers essential to recover the legal security lost after the Energy Reform, which has jeopardized many wind farms and companies and has resulted in a number of national and international legal processes. For a starter, it is necessary to amend certain aspects of the regulation, such as the regulator’s possibility of changing economic conditions and, with them, reasonable return every six years. It would also be necessary to call as soon as possible an auction for the remaining 5,900 MW of wind power or a schedule of auctions to be held before the end of 2017 in order to install the necessary capacity in time to meet the deadline. In any case, some aspects of the first auction of 500 MW should be corrected; due to its atypical format (it was an isolated auction and of very small volume in a context in which the sector has been paralysed for years), it had unexpected results that have cast further uncertainty to the already complicated situation of wind energy in Spain. It is therefore essential that the Government consults with the sector. 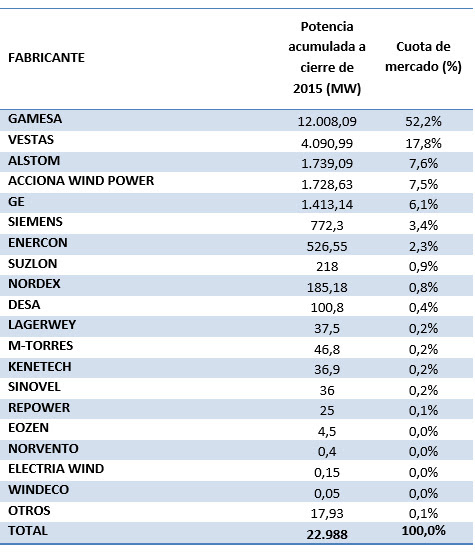 The installation of more than 6,000 MW of wind power in four years has been done in Spain in previous periods due to factors such as a favourable regulation, developers will and the existence of a strong domestic industry. This means that if certain aspects of the regulation were modified to recover the confidence of investors and facilitate access to financing, it could be attempted again.