The Spanish company ACCIONA and the Mexican Federal Electricity Commission (CFE) have signed a memorandum of understanding (MOU) to work together on electricity generation projects based on renewable energies in Mexico. ACCIONA President José Manuel Entrecanales and CFE Director-General Doctor Enrique Ochoa Reza were present at the signature ceremony. 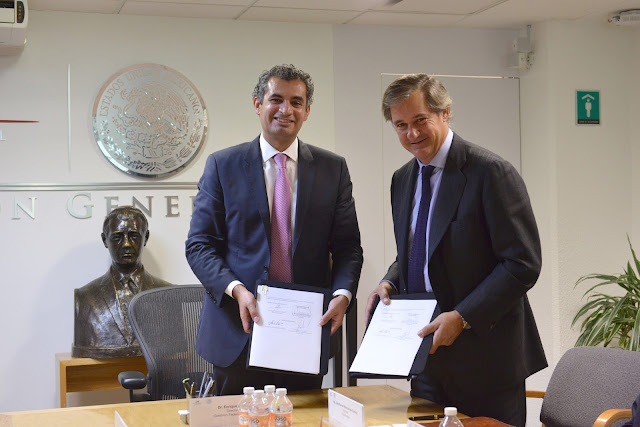 The memorandum has been signed within the framework of the country’s 2014 Energy Reform, in which the energy sector was liberalized and the CFE became a productive State-owned company.

Under the agreement, both parties will work to prepare documents that analyze and evaluate renewable energy projects – mainly wind, photovoltaic or hydroelectric power – to be carried out within the framework of the MOU. This work could also be done jointly under other, later agreements.

The memorandum was signed by Miguel Angel Alonso, the legal representative of ACCIONA Energía in Mexico, and Engineer Benjamín Granados Domínguez, Director of Investment Finance Projects of the CFE.

ACCIONA Energía, a world leader in renewable energies with more than 8,500 MW owned and operated worldwide, has a strong presence in Mexico. It has 556.5 MW in Oaxaca, distributed in four wind farms (Eurus, with a capacity of 250.5 MW, and Oaxaca II, III and IV, each with 102 MW), making it the biggest owner of wind power assets in Mexico.

The company is currently building two wind farms for third-party customers in Nuevo León: Ventika and Ventika II (total 252 MW) and another 49.5-MW project at Ingenio in Oaxaca.

The company has a large wind and photovoltaic order portfolio for development over the next few years.

Its subsidiary ACCIONA Windpower, which recently signed an integration agreement with the German company Nordex, has completed sales for wind power projects in Mexico totaling 988.5 MW.

Other areas of the ACCIONA Group, to which ACCIONA Energía belongs, also have a strong presence in Mexico.

ACCIONA Agua is part of a joint venture that is building the Atotonilco wastewater treatment plant, the biggest in the world, which will treat the wastewater of 10.5 million inhabitants of Mexico City.

For its part, ACCIONA Infraestructuras has carried out projects in the civil engineering, property development and representative building fields covering more than 300,000 square meters in Mexican territory.

The Group employs more than 1,000 people in the country.