Renewable energy will represent the largest single source of electricity growth over the next five years, driven by falling costs and aggressive expansion in emerging economies, the IEA said Friday in an annual market report. Pointing to the great promise renewables hold for affordably mitigating climate change and enhancing energy security, the report warns governments to reduce policy uncertainties that are acting as brakes on greater deployment. 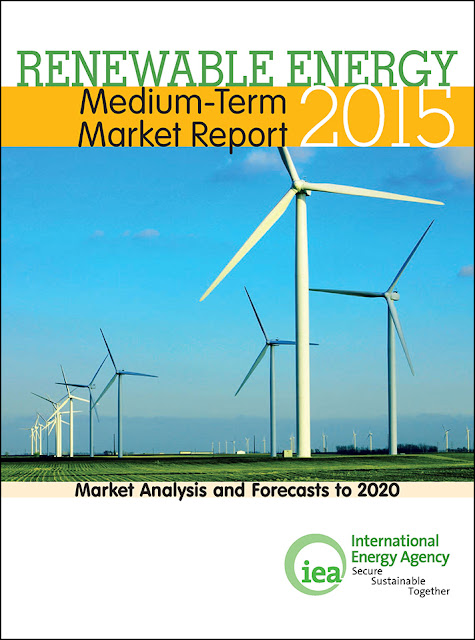 “Renewables are poised to seize the crucial top spot in global power supply growth, but this is hardly time for complacency,” said IEA Executive Director Fatih Birol as he released the IEA’s Medium-Term Renewable Energy Market Report 2015 (MTRMR) at the G20 Energy Ministers Meeting. “Governments must remove the question marks over renewables if these technologies are to achieve their full potential, and put our energy system on a more secure, sustainable path.”

Renewable electricity additions over the next five years will top 700 gigawatts (GW) – more than twice Japan’s current installed power capacity. They will account for almost two-thirds of net additions to global power capacity – that is, the amount of new capacity that is added, minus scheduled retirements of existing power plants. Non-hydro sources such as wind and solar photovoltaic panels (solar PV) will represent nearly half of the total global power capacity increase.

The report sees the share of renewable energy in global power generation rising to over 26% by 2020 from 22% in 2013 – a remarkable shift in a very limited period of time. By 2020, the amount of global electricity generation coming from renewable energy will be higher than today’s combined electricity demand of China, India and Brazil.

The report says the geography of deployment will increasingly shift to emerging economies and developing countries, which will make up two-thirds of the renewable electricity expansion to 2020. China alone will account for nearly 40% of total renewable power capacity growth and requires almost one-third of new investment to 2020.

Renewable generation costs have declined in many parts of the world due to sustained technology progress, improved financing conditions and expansion of deployment to newer markets with better resources. Announced prices for long-term generation contracts at reduced levels are emerging in areas as diverse as Brazil, India, the Middle East, South Africa and the United States. As such, some countries and regions now have the potential to leapfrog to a development paradigm mainly based on increasingly affordable renewable power. This is especially true in Sub-Saharan Africa.

“Affordable renewables are set to dominate the emerging power systems of the world,” Dr. Birol said. “With excellent hydro, solar and wind resources, improving cost-effectiveness and policy momentum, renewables can play a critical role in supporting economic growth and energy access in sub-Saharan Africa, meeting almost two-thirds of the region’s new demand needs over the next five years.”

Still, the MTRMR highlights risks. Financing remains key to achieving sustained investment. Regulatory barriers, grid constraints, and macroeconomic conditions pose challenges in many emerging economies. In industrialised countries, the rapid deployment of renewables requires scaling down fossil-fired power plants, putting incumbent utilities under pressure. Wavering policy commitments to decarbonisation and diversification in response to such effects can undermine investor confidence and retroactive changes can destroy it. Consequently, global growth in the report’s main case forecast is not as fast as it could be – and annual installations level off, falling short of what’s needed to put renewables on track to meet longer-term climate change objectives.

The report includes an accelerated case that assesses the impacts of enhanced policy frameworks in key countries, finding that this could boost global cumulative renewable power growth by 25% above the main case, with rising annual installations. An improving picture for renewables can have positive ramifications for global climate change negotiations. At the same time, a clear, supportive outcome from the COP21 climate negotiations in Paris in December could create a virtuous cycle for renewable deployment by increasing long-term policy vision and predictability.

But the accelerated case requires more coherent and committed policy action. “To be sure, system and grid integration will be crucial for enabling high levels of wind and solar PV. The IEA remains at the forefront of addressing these issues, including possible impacts on electricity security,” concluded Dr. Birol. “But while variability of renewables is a challenge that energy systems can learn to adapt to, variability of policies poses a far greater risk.”

The Medium-Term Renewable Energy Market Report 2015 is part of a series of annual reports the IEA devotes to each of the main primary energy sources: oil, gas, coal, renewable energy and – as of 2013 – energy efficiency. The report is for sale by the IEA bookshop. Accredited journalists who would like more information or who wish to receive a complimentary copy should contact ieapressoffice@iea.org.