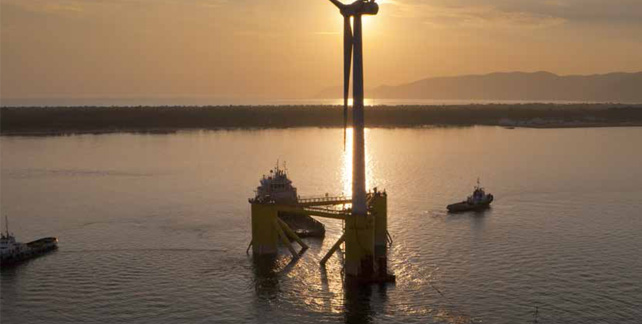 Huge spikes in electricity transmission rates and an impending energy shortage in southern New England are killing businesses, hampering new economic growth and making it tough for many people to make ends meet. The problem will likely reach a crisis point with the impending closure of Somerset’s Brayton Point Power Plant in 2017.

Most of New England’s power plants are 50- to 60-years-old. They rely on coal and natural gas, produce heavy pollution, and are reaching the end of their lifespans. New England must develop cleaner and more efficient ways to produce electricity that does not have to be expensively piped in from other regions. Every potential solution is still years away and we don’t have time to waste.

One smart solution may literally be blowing in the wind. There’s huge potential for the generation of offshore wind energy just off the SouthCoast that could be delivered to the grid — potentially utilizing the existing transmission infrastructure in Somerset.

Three 190,000-acre parcels in federal waters between Nantucket, Martha’s Vineyard and Block Island have been leased to three companies for the creation of offshore wind farms. A New Bedford-based coalition of offshore wind companies and advocates claim there’s enough power potential in just one of those parcels to replace the 1,500 megawatts of electricity currently being generated by Brayton Point. Bringing all three wind farms online could generate a whopping 5,000 megawatts of power.

State Rep. Patricia Haddad, D-Somerset, has become a staunch advocate of offshore wind power. Haddad, the House speaker pro-tempore, is pushing legislation that she says would help spur the investment necessary for private multi-billion dollar investment without any state subsidies.

It would require utilities to purchase 2,000 megawatts of offshore wind. “It’s not asking for the state to invest in this,” Haddad said. “It’s asking for the opportunity to bid into the grid.”

Harnessing the power of the free market to make the development of offshore wind energy viable is a smart approach that would avoid the pitfalls Massachusetts has seen in previous failed clean energy strategies that have “picked winners and losers,” making the commonwealth the loser.

Haddad’s legislation, which has gained bipartisan support from the area’s legislative delegation, will be the subject of a hearing before the Joint Committee on Telecommunications, Utilities and Energy on Tuesday. She anticipates offshore wind will become part of a comprehensive energy bill expected to be adopted next year.

Opponents point to the failed Cape Wind proposal when they say offshore wind is not a realistic prospect. But there are big differences between Cape Wind’s proposal for a wind farm four miles off Cape Cod and the current plan.

As Haddad said, “This is the successor of Cape Wind without any of the baggage of Cape Wind.” Prices of turbines and other equipment needed to build the infrastructure have dropped significantly. Furthermore, there is major potential for costs of scale, making the price of offshore wind competitive.

This project will also not draw the “not in my backyard” opposition that — along with economic factors — doomed Cape Wind and could kill proposals to build much-needed pipelines for natural gas from New York state and hydroelectric power from Canada.

The prospective wind farm areas are barely visible from any land, in areas that have some of the world’s most powerful winds. Cables for transmission would be underwater and would likely tie into existing lines.

Offshore wind energy would also be a game changer for the SouthCoast’s economy as it would create a new work-intensive industry likely centered in New Bedford, which has already invested significantly in building the infrastructure for the clean energy industry, along with other port areas.

Offshore wind is not a pipe dream. A small, five-turbine, 30 megawatt wind farm currently being constructed by Deepwater Wind off the coast of Block Island is creating 300 jobs. Haddad and state Sen. Marc Pacheco, D-Taunton — both back from a tour of wind farms off the coast of Denmark — have the pictures to prove that offshore wind works in northern Europe and has helped revitalize post-industrial cities there.

State officials ought to tap the potential of this fledgling SouthCoast industry that can employ thousands of people and cleanly fuel New England’s 21st century economy with this free, plentiful, year-round local resource. If it can work in Denmark, it could work for us.