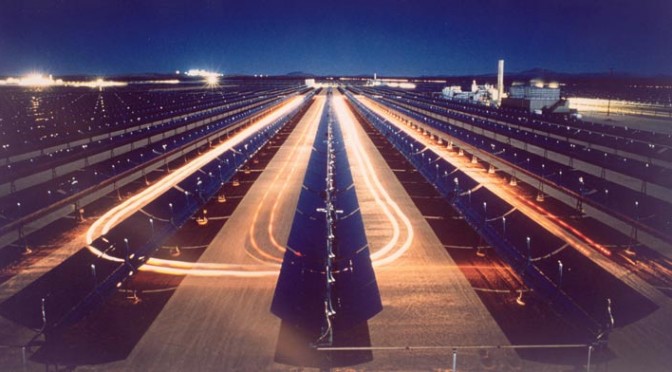 The 110-megawatt Concentrated Solar Power plant, the first of its kind in Israel, will produce solar thermal electricity using the parabolic trough method.

The 110-megawatt Concentrated Solar Power plant, the first of its kind in Israel, will produce thermo-solar electricity using the parabolic trough method. This method uses large parabolic mirrors that focus the sun’s rays on a receiver with special optical characteristics.

Through Rioglass’s technology a thermal liquid flows through the receiver heated by the sun to a temperature of 400 degrees celsius. The hot liquid heats water into steam that drives a turbine to generate electricity.

Rioglass Solar Systems general manager Onn Fenig said, “Our proprietary technology will enable the first of its kind project in Israel, generating “greener” electricity for the state’s grid. As an international company which partners in similar projects around the world, we feel tremendous pride that the main technology which will enable Israel’s first solar thermal power plant will be our technology – developed and manufactured in Beit Shemesh. This first project in Israel where solar thermal technology is used to generate high voltage electricity is a paramount milestone in the process of shifting from burning polluting fossil fuels to utilizing clean resources in order to produce a more environmental friendly electricity.”

In another project, the Ketura Sun solar field was connected to Israel’s electricity grid yesterday. Ketura Sun is one of Israel’s largest solar fields, with a production capacity of 40 megawatts, and the largest field currently connected to the electricity grid. The field is owned by Arava Power and EDF Energies Nouvelles Israel, a subsidiary of the French national power company.