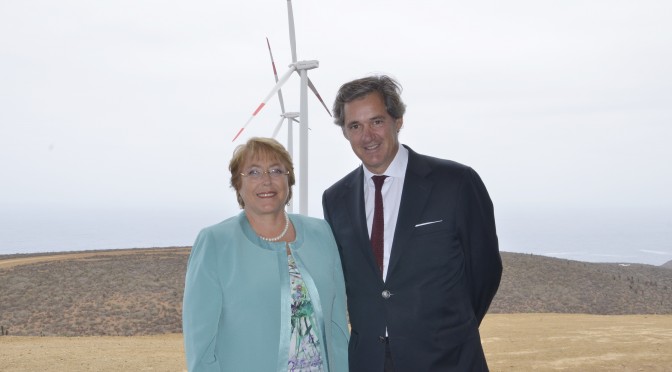 ACCIONA reported €103 million in net profit in the first half of 2015, a 50.6% increase with respect to the same period of 2014, basically as a result of growth in international markets by the power generation business and wind turbine manufacturer ACCIONA Windpower (AWP).

Ordinary earnings before taxes (EBT) increased by 183% to €153 million, from €54 million the previous year, due mainly to a €102 million increase in EBT in the Energy division.

EBITDA increased by 21.4% to €573 million, broadly as a result of growth by the Energy division (+29.9%), driven by the international business and ACCIONA Windpower. EBITDA in power generation increased by 9.4% (to €445 million) due to the increase in international installed capacity, a slightly higher load factor and the positive effect of the dollar’s appreciation, while AWP reported €45 million in EBITDA, contrasting with a loss of €5 million in the same period last year.

Group consolidated revenues increased by 9.9% to €3,304 million, driven basically by a 48.9% increase in revenues in the Energy division, which offset the decline in business volume in Construction, Agua and Other Activities.

The Infrastructure division (which encompasses Construction, Agua and Service) billed €1,623 million in the first half, a 6.4% decline on the same period of 2014, basically because of a decline of 8.5% in revenues in Construction and 12.5% in Agua, offset partly by a 4.9% increase in Service business volume. The division’s EBITDA amounted to €69 million, 5.1% more.

In particular, the concession business increased revenues by 6.3% and EBITDA by 13.4%.

The Other Activities division, which includes Trasmediterranea, Real Estate, Bestinver and Wineries, saw revenues fall 18.1% to €278 million, while EBITDA declined to €32 million, 23.6% less than in the same period of 2014, due to declines at Bestinver and Real Estate. In contrast, Trasmediterranea increased EBITDA by €7 million due to better revenue performance and lower fuel prices. Bestinver attained €5,373 million under management at 30 June 2015, and reported €31 million in EBITDA.