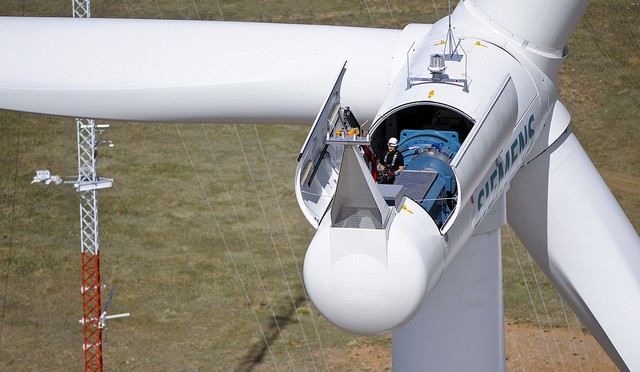 These pledges further a growing trend of non-utility companies investing in wind power and other clean energy sources because it enables them to lock in low energy prices and cost-effectively reduce their carbon footprints.

Here are some of the pledges that include renewable energy components:

“Apple, already running all of its U.S. operations on 100% renewable energy, will bring an estimated 280 megawatts of clean power generation online by the end of 2016 through investments in Arizona, California, Nevada, North Carolina, Oregon and Sichuan Province, China.”

“Attract a wider array of capital to clean energy investments by developing innovative financing structures – from reducing investment risk though our Catalytic Finance Initiative to engaging individual investors through our Socially Responsible Investing platform to building new markets for green bonds, yield-cos and other vehicles.”

“Build on our investment of more than $15 billion in renewable energy generation under construction and in operation through 2014 by investing up to an additional $15 billion.

Pursue construction of an additional 552 megawatts of new wind generation in Iowa, increasing MidAmerican Energy Company’s generating portfolio to more than 4,000 megawatts of wind which is comparable to 57 percent of its retail energy load in 2017.

Add more than 1,000 megawatts of incremental solar and wind capacity through long-term power purchase agreements to PacifiCorp’s owned 1,030 megawatts of wind generating capacity. PacifiCorp is the nation’s second largest owner of wind generation among regulated, investor-owned utilities. This incremental renewable generation, expected to be online by the end of 2017, would bring PacifiCorp’s non-carbon generating capacity to more than 4,500 megawatts which equates to approximately 22 percent of PacifiCorp’s retail energy load in 2017.

Invest in transmission infrastructure in the West and Midwest to support the integration of renewable energy onto the grid.

Support and advance the development of markets in the West to optimize the electric grid, lower costs, enhance reliability and more effectively integrate renewable resources.”

“In the next five years, increase renewable energy to 18 percent of our total energy use, up from 14 percent, from a 2015 baseline.”

“In 2012, we established a ten year goal to finance and invest $40 billion in clean energy globally.  Three-and-a-half years into that goal, we have already mobilized $33 billion of capital for solar, wind, smart grid and other clean technologies.  We expect to achieve the full goal within the next year and will commit to establish a larger 2025 target to deploy capital to clean tech and renewable energy.

We will also aim to use 100% renewable power to meet our global electricity needs by 2020.”

“Purchase 100% renewable energy for the operations of our datacenters, offices, labs, and manufacturing facilities.”

“Utilize the data generated and best practices learned at our facilities employing photovoltaic systems in the U.S. to help inform future solar installations and meet our goal of achieving an absolute greenhouse gas reduction.”

“In 2014, we operated with 9 percent less energy per square foot compared with our 2010 baseline and 26 percent of our electricity used was generated from renewable sources – keeping us on track toward our goal of being powered by 100 percent renewable energy.

Drive the production or procurement of 7 billion kilowatt hours (kWh) of renewable energy globally by Dec. 31, 2020 – an increase of more than 600 percent versus our 2010 baseline.

Double the number of on-site solar energy projects at our U.S. stores, Sam’s Clubs and distribution centers by 2020, compared with our 2013 baseline.”