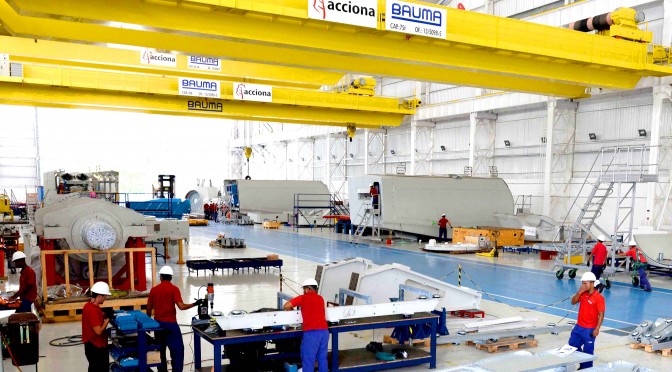 ACCIONA Windpower, a subsidiary of the ACCIONA Group, has complied with the last requests issued by the BNDES (Brazilian Development Bank) for the national sourcing of components for wind turbines, meaning that wind power projects in Brazil can be financed under terms that are more favorable. It has complied with them six months in advance of the deadline.

The BNDES has announced on its website that ACCIONA Windpower fulfils the requirements for national purchasing indicated in the FINAME regulations for the final phase of certification, which expires on 1 January 2016. This confirms the company’s record of compliance with the milestones involved in the process well in advance.

This means that ACCIONA Windpower can offer its turbines for wind power developers with the guarantee that they meet with all the regulations on local outsourcing established in the overall certification process.

“We are pleased to have completed this process, as it strengthens our ability to develop the local supply chain and deliver projects. It also guarantees our customers better access to BNDES finance for their wind energy developments”, says ACCIONA Windpower Brazil Director Christiano Forman.

The company has a nacelle assembly plant in Brazil that also assembles hubs (in Bahia) and a concrete tower production facility in Rio Grande do Norte. It also purchases blades and other wind turbine components in the country.

ACCIONA Windpower’s current workforce in Brazil numbers 300 people and the company’s activity has created – or consolidated – more than 1,000 direct and indirect jobs in the country.

This turbine has consolidated itself as a proven and competitive option for the Brazilian wind power market. Specifically, the sales are for versions with rotor diameters of 125 and 116 meters, mounted on 120- and 100-meter-high concrete towers. The company also markets models with a rotor diameter of 132 meters on 137.5-meter-high towers.