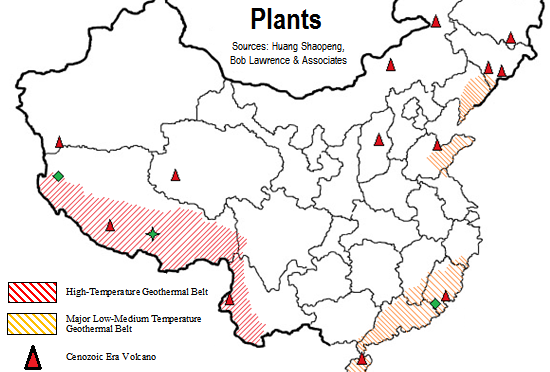 On December 12, 1970, China’s first geothermal plant began generating power in Guangdong province—the culmination of a long national campaign led by Li Siguang, China’s first Minister of Geology. Using his influence as a scientist and politician, Li successfully argued that geothermal energy was as valuable of a resource as traditional fossil fuels. This led to the trailblazing construction of ten plants in the relatively dense, energy-hungry eastern half of the country as well as three more in Tibet. 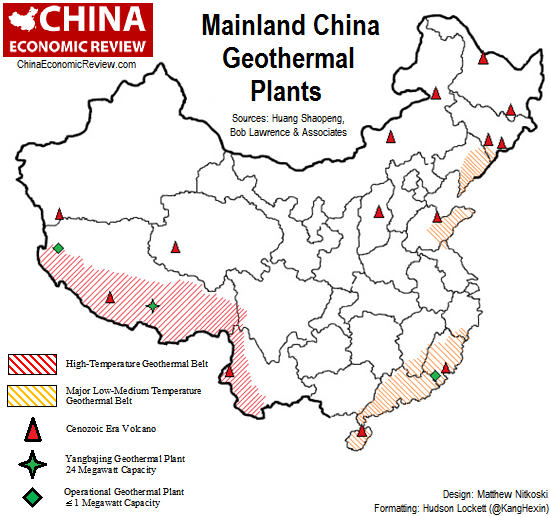 With so many projects under construction, the minister was probably optimistic about the prospects for geothermal energy when he died only a few months after the first plant went into service in Fengxian County. Unfortunately, his passing robbed the geothermal sector of its greatest champion calling for greater exploration and exploitation. Plants were slowly shuttered throughout the rest of the century and by 2012 there were only three operational in the entire country.

But after lying dormant for decades, a series of central government initiatives could potentially revive China’s geothermal industry and allow the country to harness its vast, untapped heat reserves. China’s Geothermal Energy Data and Information System, due to be established this year, could reinvigorate an industry that has faced more difficulties and setbacks than more visible, above-ground renewables. While it will probably remain a small portion of China’s overall energy mix for the foreseeable future, the new data system, alongside the National Energy Administration’s forthcoming Geothermal Development Plan, could help stimulate growth in a sustainable resource with enormous potential.

Power from the underground

Geothermal power is generated by pulling steam and hot water from deep within the earth, using the heat to drive electric generators, and then returning the warm water back into the ground. There are three basic designs for geothermal power plants, all of which revolve around capturing the naturally occurring heat that is generated by the decay of radioactive matter deep underground.

According to Shaopeng Huang, an associate research scientist at the University of Michigan, the death of Li Siguang was the most important factor in the derailing of China’s geothermal plans. Without Li’s powerful patronage, the government quickly lost interest in potentially risky energy sources. In addition, “geothermal energy has suffered under the misconception that the southwest of China is the only region with viable naturally occurring heat sources. There have been no utility-scale geothermal power project outside of Tibet due to the belief that areas with hydrothermal manifestation (i.e. hot springs) are the only places suitable for geothermal development.”

While Tibet does possess the country’s most readily accessible heat, viable geothermal resources can be found anywhere, even in areas where surface-level manifestation is weak or completely absent. After all, Huang asks, “How often do we see people drilling for petroleum in an area where oil is naturally surging to the surface?”

Back from the grave

China’s urgent need to diversify away from coal means that geothermal’s stock is on the rise once again as renewables gain greater importance. Last year, it established a national forum to promote geothermal resource use, and in March held its Fourth Annual Conference for the Development and Utilization of Geothermal Energy. The forthcoming Geothermal Development Plan will also figure into the 2016-2020 five-year plan and set out a clear series of goals and benchmarks for geothermal development throughout the country.

These directives all indicate the growing importance that geothermal energy will play in the coming years as China pursues its “everything but coal” strategy. As a whole, these policies will help incorporate geothermal production into national energy and climate change plans as well as provide policy makers and industry experts with a better idea of where the best heat sources are located. Both are priorities that Huang highlighted in the 2012 article Geothermal Energy in China (pdf) for the journal Nature

Drilling for high-temperature reservoirs can still be dangerous and difficult for companies that lack the appropriate equipment, experience and expertise. To help bridge these and other gaps that prevent research projects from becoming commercially viable, China Petrochemical’s geothermal development division Sinopec Star Petroleum has spent more than US$150 million developing new plants in the past few years.

With the government looking to strengthen emissions regulations and further develop renewables, geothermal energy could begin to look more attractive to investors and consumers as well—helping to address two major issues policy makers will likely be wrestling with for much of the rest of this century: Energy consumption and pollution. Relying on a sustainable, consistent, and readily available resource such as geothermal energy can help to alleviate the serious problems threatening the environment, public health, and future growth prospects.

Revived policies and investments suggest that the government will begin to capitalize on its abundant geothermal resources, resources that Li Siguang recognized nearly five decades ago. Dr. Shaopeng Huang proposed a goal of having 9 gigawatts of geothermal capacity installed by 2020, an amount that would mean 0.5% of the country’s electricity is produced from naturally-occurring heat sources. Although this is modest figure in China’s overall energy profile, further development of geothermal could ease the burden on other renewable energy sources and provide the country with another valuable alternative to coal.