The government proposes to launch a national wind energy mission (NWM) on the lines of the ongoing solar mission as part its drive to achieve exponential growth in renewable energy. 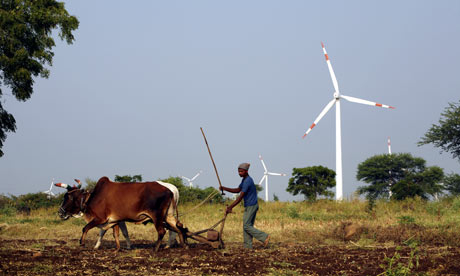 The main objective of this initiative would be to make India a global leader in wind power, by creating conditions conducive for its diffusion across the country in a time-bound manner.

The cabinet note on the new policy is already in final stages and would come up for approval shortly.

NWM will set a target of raising wind power generation to 60,000 MW by 2022 with an investment of Rs 10,00,000 crore. It will aim to add further capacity through a mix of fiscal incentives to encourage adoption of new technologies and flow of global investments.

“We intend to launch NWM before the end of this financial year to maintain the momentum that we have gained over the past few months for the development of renewable energy projects, especially under the national solar mission,” a government official privy to the development said.

The need for a long-term and stable policy framework covering all key aspects such as land allocation, tariff fixation, incentives, manufacturing policy, planning for transmission infrastructure and managing intermittency (in supply) is the key driver for this exercise, the official said.

As a first step towards bringing the wind sector under mission mode, the government will soon announce a national offshore wind energy policy to tap the country’s maritime regions, which have vast potential of wind power.

Also, areas that have good wind energy potential are likely to be declared as exclusive zones.

“This would be followed up with the adoption of a long-term policy initiative for all wind power projects covering areas such as land allocation, tariff fixation, incentives, manufacturing policy, planning for transmission infrastructure, adoption of a competitive bidding process and managing intermittency (in supply),” the official said.

The plan being finalised by the ministry of new and renewable energy also includes additional sops for wind projects over and above the incentives available under the accelerated depreciation and generation-based incentive scheme.

Such sops could be in the form of fiscal incentives such as exemption from service tax for conducting wind resource assessment, environment impact assessment (EIA), oceanographic study, utilisation of survey vessels and installation of vessels for these projects.

Tax exemption could also be considered for inter-state sale of renewable energy and for setting up transmission infrastructure to evacuate this power.

In addition, the sunset period of 10-year holiday scheme may be extended for the entire period of the scheme up to 2022. The tax holiday benefit under section 80-IA of the income-tax act ends on March 31, 2017, making any power project that starts operating after that date ineligible for the sop.

The incentive scheme allows a developer to claim deduction of up to 100 per cent of profit for any 10 consecutive years out of the first 15 years from the commissioning of a project.

India’s potential for wind energy is enormous. One estimate pegged it at 4,000 gw while another GIS-based study suggested that country has potential to produce 5,00,000mw of offshore wind capacity.

The government is already targeting 1,00,000mw solar capacity by 2022. Even without NWM, the power minister has been aiming to add close to 10,000mw of wind capacity every year over the next few years.