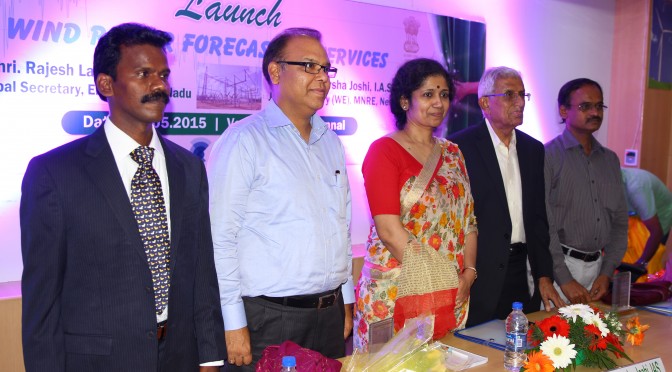 The pilot project launched on 13 May by the National Institute of Wind Energy (NIWE) will help Tamil Nadu’s state-owned electricity generation and distribution utility, Tangedco, better manage fluctuations in energy generation from the region’s 7.4 GW of installed wind capacity. 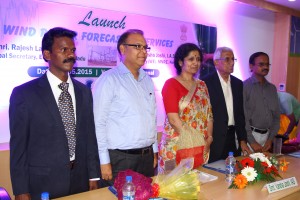 Vortex and NIWE will provide electricity generation forecasts down to a fifteen-minute resolution up to 10 days ahead; with bulletins being revised every three hours to provide accurate predictions that enhance grid stability and energy security.
Data will be generated by Vortex’s FORECAST service, providing on-line forecasts of wind speed and direction, power output and other meteorological variables over several time horizons.
Vortex FORECAST is already forecasting more than 1000 MW in 15 countries around the globe.
Wind modelling specialist Vortex has partnered with India’s National Institute of Wind Energy (NIWE) to enhance wind forecasting in Tamil Nadu state. The project was announced on 13 May and will help Tamil Nadu’s state-owned electricity generation and distribution utility, Tangedco, better manage fluctuations in wind output in the region.
India is currently ranked fifth in the global wind energy league with over 23 GW of installed capacity. Spurred by the state’s support for renewables, wind energy generation capacity in India could rise by 5 GW per annum over the next decade. According to the Global Wind Energy Association (GWEC), India could reach 49 GW by 2020 under a moderate scenario, which would involve €6.6 billion of investments per year by 2020.
Nevertheless, GWEC reports, the Indian wind industry faces several hurdles including transmission, scheduling and forecasting problems, resulting in wind turbines being taken off line because grid mangers cannot accurately predict wind output and its effect on the entire grid.
Tamil Nadu tops India’s wind ranking, boasting 7.4 GW in 2015 – 35% of total installed capacity in the country. However, it too is facing the same challenges. Indian Wind Power Association (IWPA) Chairman, Dr K Kasthurirangaian, highlights that two to three billion units of electricity were lost each year in 2013 and 2014 because of wind farm downtime resulting from Tangedco’s difficulty in accurately predicting wind generation.
2
Pilot project a prototype that can be rolled out across India
Here is where Barcelona-based wind modelling expert, Vortex, will make a difference. It has joined forces with India’s National Institute of Wind Energy (NIWE) on a first-of-its kind project to provide forecasts of output from the wind farms connected to five substations at Kayathar and Udumalpet. This approach will then be extended to all 120 substations serving the 7,420 MW of installed wind capacity in Tamil Nadu
Additional Director and Head of Wind Resource Assessment Unit at NIWE, K Boopathi, said at the unveiling of the project on 13 May that the institute would gather wind data from various wind farms across the state and work with Vortex to arrive at wind power generation estimates for the following day for the entire installed capacity. According to DG/NIWE, the service order for Vortex-NIWE FORECAST was given the green light by IWPA on 28 May 2015.
Vortex has been helping over 50 companies better predict wind energy resources in recent years, already forecasting more than 1000 MW in 15 countries. This time, Tamil Nadu’s state-owned electricity generation and distribution utility, Tangedco, will benefit from the data produced using Vortex’s FORECAST service, offering fifteen-minute forecasts up to 10 days ahead with bulletins being revised every three hours.
“We are very proud that our cutting-edge forecasting service has been selected by NIME,” commented Gil Lizcano, Vortex R&D Director, after the project was announced. “FORECAST uses real-time data to provide increasingly accurate forecasts and we expect that the outcome of the project will provide a blueprint for the rest of India.”
Smoothing the transition to wind
India’s Central Electricity Regulatory Commission (CERC) made wind power forecasting mandatory for wind farms of more than 10 MW capacity two years ago, and wind farm owners have been forecasting at an individual unit level ever since. However, this is the first time the exercise is being attempted on a state-wide basis, allowing the grid operator in the state load dispatch center (SLDC) to exploit the forecast and real-time data on wind power generation at substation level to schedule evacuation of power, switching off gas and hydro-based units as and when wind generation changes.
“The difficulty in absorbing wind energy will now be addressed with the launch of the forecasting and scheduling facility,” said Tangedco’s Generation Director, S. Devarajan, at the launch by Ms Varsha Joshi, Joint Secretary/MNRE, Govt. of India, with Dr K. Kasthurirangaian adding that the grid operator will have forward-looking data on wind power availability at its fingertips, enabling a proper mix by using the total wind energy resources available.
Vortex’s CEO, Pep Moreno, is excited about this latest project for his company and prospects for the Indian wind industry: “India has great potential to exploit its wind resources and our goal at Vortex is to help grid operators, private owners and NIWE cope better with increasing amounts of renewables in the energy mix”.

Vortex started its technology development in 2007 with a team of wind industry professionals with extensive experience, and a group of veteran experts in atmospheric modelling. Vortex’s technology is based on WRF, a non-linear atmospheric model developed through a collaborative effort by several atmospheric research centers and an active community of users. Vortex’s online wind modelling and forecasting service offering includes applications for the design and operation phases of wind farms, while it also provides similar services to the solar and ocean energy industries.

Vortex offers resource maps with different resolutions delivered within 24 hours, sent directly to a client’s computer, and can provide time series for both a specific point where a potential metrological mast is to be erected or wind fields for an entire wind farm (at 100m resolution), including extreme wind speed and turbulence values.