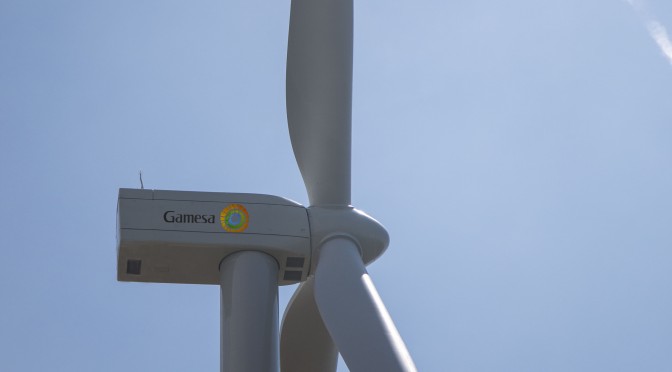 The prototype of Gamesa’s new G114-2.5 MW turbine, installed in Alaiz (Navarre, Spain), has started to generate power. Installation of the turbine triggers the start of the intensive process of validating and certifying the new turbine. The company expects to obtain type certification during the last quarter of 2015.

Assembly of the prototype posed a genuine logistics challenge for Gamesa. The G114-2.5 MW’s blades – 56 metres apiece – were transported in one piece and the components were made at multiple locations in Spain: the blades in As Somozas (Galicia); nacelle assembly in Ágreda (Soria); the hub and gearbox in Burgos; the generator in Reinosa (Cantabria) and the converter in Valencia. 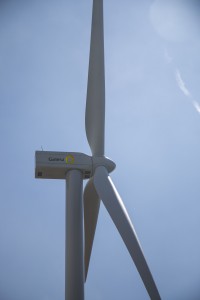 The prototype installed in Alaiz boasts a modular design, enabling tailored configuration to factor in each facility’s specific construction and logistics considerations. The turbine can also be ordered with nacelles made in a single piece.

The new G114-2.5 MW turbine is underpinned by proven technology, validated in the Gamesa 2.0-2.5 MW platform, one of the most reliable in the market, having been installed in 34 countries (cumulative installed capacity: 19,300 MW).

The company has already signed several orders for this new make of turbine. The first, placed by international investor group and infrastructure manager John Laing, encompasses the installation of six G114-2.5 MW turbines at the Rammeldalsberget wind farm in Sweden; the turbines will be equipped with MaxPower technology, designed to boost nominal capacity from 2.5 MW to 2.625 MW. The second, placed by developers EDF and Eneco, is for the installation of 17.5 MW at the Berloz wind farm in Belgium. And the last and most recently placed order will entail the installation of 94 G114-2.5 MW turbines for Scottish Power at the Kilgallioch complex.

This turbine, designed for class II wind speed sites, comes with a longer blade and increased nominal capacity of 2.5 MW in order to maximise efficiency and profitability while reducing the cost of energy in the 2.0-3.0 MW segment. As a result, the G114-2.5 MW turbine produces 29% more power than the G97-2.0 MW model, while lowering the cost of energy by 10%.

“The G114-2.5 MW is the first 2.5 MW turbine developed by Gamesa within a new generation of 2.0-2.5 MW turbines which is changing the cost of wind energy paradigm. A sizeable team of Gamesa engineers has spent the last three years developing this entire new product range, building on the track record implied by the existing 2.0 MW platform’s millions of operating hours and carrying out the firm’s most extensive component and sub-system validation program to date”, said José Antonio Malumbres, Gamesa’s Chief Technology Officer.