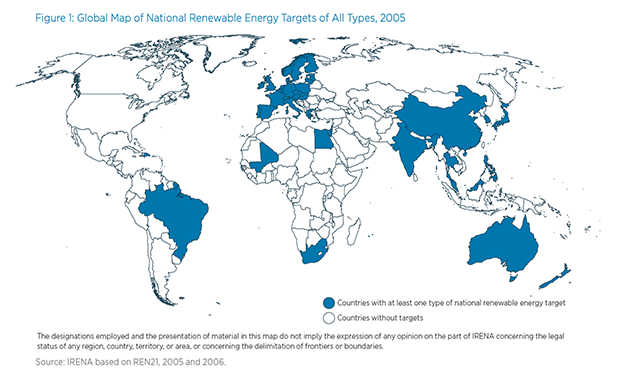 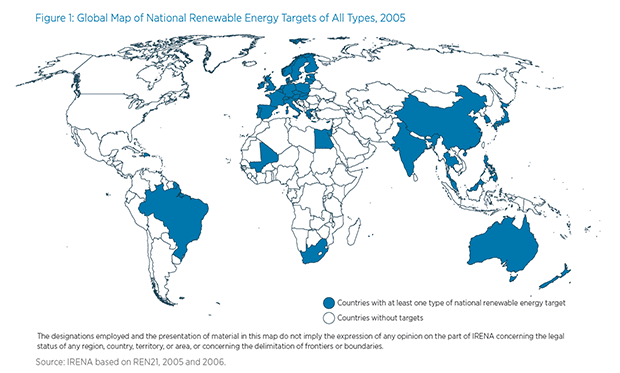 “Renewable energy targets have emerged as a popular mechanism to set national and regional economies on the path towards a more secure and sustainable energy future,” said IRENA Director-General Adnan Z. Amin. “They provide an important signal to the industry and can help to align stakeholders by creating a clearer, common vision for the development of the energy sector.” 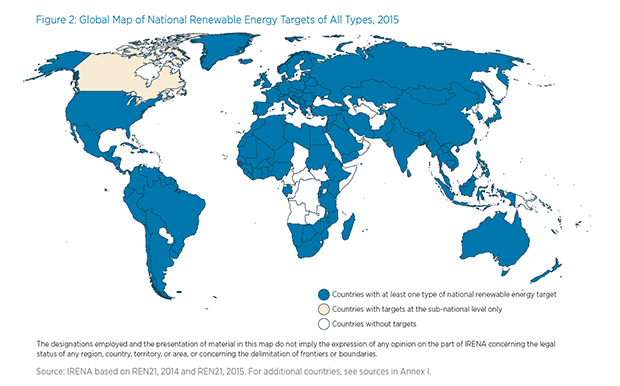 “Governments are increasingly adopting renewable energy targets to meet multiple objectives including energy security, environmental sustainability and socio-economic benefits,” said Mr. Amin. “The rapid growth of targets is just one more signal of the world’s ongoing shift towards renewable energy and away from fossible fuels.”

While underscoring the importance of renewable energy targets, the report recognises that they are not sufficient in and of themselves. In order to be seen as credible by investors and society and to provide a reliable trajectory for the future evolution of the energy mix, they need to be accompanied by a clear strategy and backed by specific policies and measures.

Renewable energy targets have become a defining feature of the global energy landscape. Some 164 countries around the world have adopted at least one type of renewable energy target as of mid-2015, up almost four-fold from 43 countries in 2005. Developing and emerging economies took on a leading role during the decade, accounting for 131 of the 164 with targets in place.

The report, produced by the International Renewable Energy Agency (IRENA), highlights the critical importance of definitions and specific design features suited to different objectives. It lays out a comprehensive framework, which can inform policy makers as they embark on the task of designing – or revising – their respective national or local renewable energy targets.

The International Renewable Energy Agency (IRENA) is mandated as the global hub for renewable energy cooperation and information exchange by 140 Members (139 States and the European Union). Roughly 32 additional countries are in the accession process and actively engaged. IRENA promotes the widespread adoption and sustainable use of all forms of renewable energy, including bioenergy, geothermal, hydropower, ocean, solar and wind energy in the pursuit of sustainable development, energy access, energy security and low-carbon economic growth and prosperity.