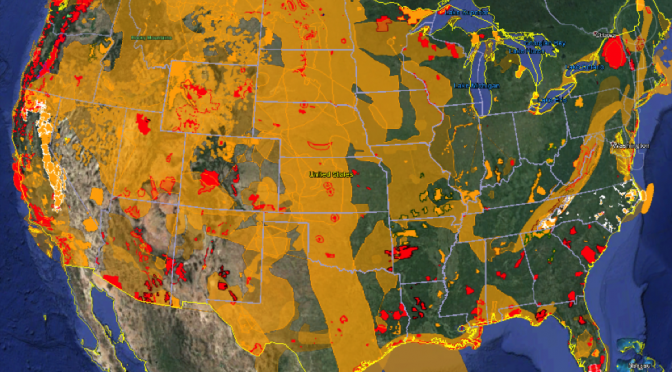 The American Bird Conservancy is suggesting blocking off the majority of the US (yellow and red areas) to wind energy development, which is incompatible with scaling up wind power enough to address climate change — the biggest threat that wildlife will face this century. 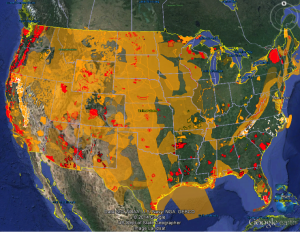 A flawed report by the American Bird Conservancy suggests blocking off the majority of the U.S. to wind development, which is incompatible with scaling up wind power enough to address the largest threat to birds: climate change.

To start any discussion of wind energy’s impacts on birds, it is important to note that no energy source – or really any human activity for that matter – is completely free of impacts, and wind energy is no exception. However, when doing a full cost-benefit analysis of wind energy’s impacts compared to other energy sources, one must consider that generating electricity from wind provides great benefits over its competitors in that it does not:

As a result, wind energy represents the lowest impact form of energy generation available to our society today. This is reinforced by a 2009 study conducted on behalf of the New York State Energy Research and Development Authority, which found that of all the energy sources evaluated (i.e. coal, oil, natural gas, nuclear, hydro, and wind), wind energy has by far the lowest cradle-to-grave lifecycle impacts on wildlife and their habitats.

The reality is our society requires vast amounts of energy to function and that energy must come from somewhere, and the choice is not between wind and nothing but rather between wind and sources of energy, which have far greater impacts on the natural environment. Further, wind energy helps reduce carbon pollution and other types of pollution threatening wildlife, and the industry works with regulators and conservation groups to minimize negative effects to wildlife and their habitats.

A recent American Bird Conservancy report suggested that entire areas should be banned for wind development, rather than continuing with individual analysis of sites that has helped wind energy scale up to address the threat of climate change, while protecting wildlife.

The image below of the American Bird Conservancy’s 2012 map shows that the organization rates the majority of American land as “High Risk” (orange or red), which it defines as areas where development of wind power “should be avoided.”

It doesn’t take a siting expert to realize that simply barring any development in these areas is not compatible with scaling up wind power enough to address climate change, which is the biggest threat that wildlife will face this century. Add in other considerations that must be taken into account when siting a wind farm – Department of Defense radar and training routes, Federal Aviation Administration (FAA) radars, etc. – and there would be virtually no developable areas with economic wind resources if development were banned in these areas.

These large blocked off areas were created based on data that is much too coarse and high level to justify decisions to site or not site a wind project in a particular area. Instead, wind developers individually analyze each site to determine whether to proceed in a particular area.

This site-specific analysis is necessary not only to avoid needlessly abandoning a wind project, but also to avoid impacting wildlife in areas thought to be safe. It is not unheard of for developers to go into an area that maps show are clear of wildlife of concern only to find such wildlife when doing on the ground, site specific environmental studies.

The American Bird Conservancy relied on FAA data to claim that future wind development was planned in areas that were in their orange and red areas. However, this approach is significantly flawed as the FAA database is essentially meaningless as a measure of estimating projects that will achieve construction and operations.

There is no way to know today what percent of the 96,000-plus turbines ABC says have been filed with FAA will ultimately be constructed. The only thing we can say with certainty is that it won’t be anywhere near 96,000, and certainly not over the next several years. Projects will get cancelled for any number of reasons: wildlife issues, inability to find a purchaser for the power, DOD or FAA concerns, costs that are too high for transmission interconnection, inability to secure enough land agreements, among other issues.

In all of 2014, 4,854 MW were constructed representing 2,500 turbines. In 2012, the record year to date for annual wind energy installations, the industry installed more than 13,100 MW representing 6,751 turbines. Basic math shows that the industry would require more than 14 years of record installations along the lines of the 2012 numbers in order to deploy all of the turbines ABC pulled from the FAA database. That demonstrates just how faulty relying on the FAA database is as a predictor how many turbines will actually be installed.

This fact aside, oil waste water pits, buildings and windows have much higher impacts on birds than wind turbines. The most robust peer reviewed published study on wind energy’s avian impacts, which evaluated data from 116 studies at 70 operating facilities around the country, found that approximately 214,000 and 368,000 birds are lost annually at wind farms (based on the 62,000 MW installed capacity at the time of publication). The authors further estimated that this mortality constitutes less than 0.05% of any of the small passerine populations (the most abundant bird group in North America) impacted by wind turbines. This amount pales in comparison to far great sources of human-caused avian mortality such as buildings and windows (365-988 Million), overhead transmission lines (12-64 Million); communication towers (6.5 Million); oil waste water pits (500,000-1 Million).

Although wind energy has much lower effects than many other industries on wildlife, the wind industry has dedicated itself for decades to a legacy of caring for the environment and wildlife. The American Wind Wildlife Institute (AWWI), the latest of the collaborative efforts developed over the last three decades between the wind industry and other stakeholders, brings together the wind industry and conservation organizations including the National Audubon Society, the National Wildlife Federation, and The Wilderness Society. It works to evaluate the impacts of the wind industry and develop practical solutions to minimizing the negative effects of the wind industry on wildlife and their habitats. One of the first efforts undertaken by AWWI, developed under contract with The Nature Conservancy, was the development of a Landscape Assessment Tool (LAT) an online mapping tool, which allows wind developers to evaluate wildlife and other resources when choosing sites. Unlike ABC’s map, the point of these maps, however, is not to ban development in any particular area, but rather to inform developers of the potential risks, which in turn can be used to develop site-specific study plans to better evaluate the risk and ultimately determine the development suitability of the site.

On the whole, the wind industry does more to study, monitor, and mitigate for its limited impacts than any other energy sector. Further, most conservation groups support the development of wind power because they know that it will help address climate change, which unlike wind energy’s impacts, threatens entire populations of wildlife. Our modern economy requires significant amounts of energy, and deciding how to produce that energy requires a careful analysis. When all the variables are considered, wind energy is the right choice for powering our society and protecting our wildlife and their habitats.