China invested more than US$89 billion in renewable energy projects in the country in 2014 – a growth of 31% on the previous year, according to a detailed report on the country’s energy sector. 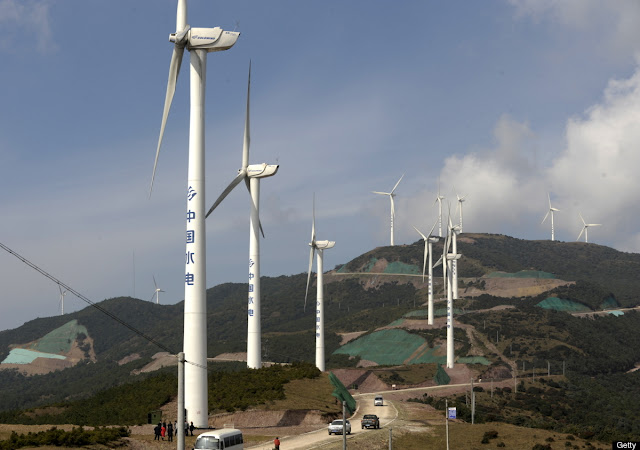 The soaring increase is revealed in a report by the US government’s Energy Information Administration (EIA). But it adds that fossil fuels ? particularly coal ? still look set to continue to dominate China’s power sector.

Coal is by far the most polluting fossil fuel, and China is the world’s leading emitter of climate-changing greenhouse gases.

Wind power production went up by nearly 40% in the 2012-13 period. Although there are still big gaps in the transmission infrastructure, the aim is to generate 200 gigawatts (GW) of electricity from wind by 2020.

“China is also aggressively investing in solar power and hopes to increase capacity from 15 GW at the end of 2013 to 100 GW by the end of 2020,” says the EIA. Substantial government subsidies have helped to fuel growth in the solar sector.

The EIA says similar levels of expansion are happening in other non-fossil fuel industries, in line with the Beijing government’s goal of producing 15% of total energy consumption from non-fossil fuels by 2020.

A large-scale hydroelectricity programme continues, with dams being constructed throughout the country.

“Because of its cost effectiveness and sizeable resource potential, hydroelectricity has become China’s key source of renewable energy generation,” says the EIA’s analysis.

At present, China produces 230 GW of power from hydro, accounting for about 8% of total energy consumption. The goal is to increase this to 350 GW over the next five years.

Although there was a pause in China’s nuclear power plant construction programme in the aftermath of the 2011 Fukushima nuclear disaster in Japan, the sector is now expanding at a rapid pace.

The EIA, quoting figures from the International Atomic Energy Agency, says China has added 10 reactors to its nuclear power capacity since the beginning of 2013. At present, installed nuclear power is 23 GW, but the aim is to more than double that figure by 2019.

Although China’s renewables growth is impressive, its energy consumption is still dominated by fossil fuels.

Coal accounted for about 66% of energy consumption in 2012, says the EIA, with oil and gas making up an additional 20%. China is the world’s top coal producer, consumer and importer – and accounts for almost half of global coal consumption.

Coal consumption was almost three times higher in 2013 than in 2000, the report says. Due to a slowdown of growth in China’s economy and to increasing concerns about serious levels of air pollution in many parts of the country, coal consumption has slowed in recent years, but is likely to remain the main source of power for many years ahead.

Late last year, in what was described as a major step in the battle against climate change, China and the US agreed to cut back on their carbon emissions.

China says its emissions are likely to continue to rise in the short term, peaking in 2030, but will fall rapidly in the following years.