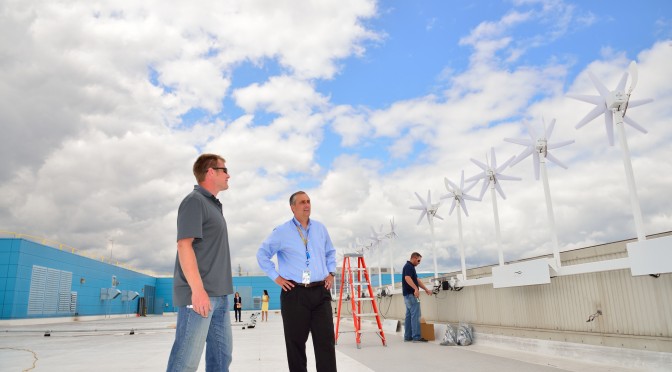 Intel CEO Brian Krzanich on the roof of Intel’s headquarters Robert Noyce Building checking out the company’s new wind microturbines. Intel is installing a total of 58 microturbines as part of a pilot wind power project. With Krzanich is Josh Beckwith, construction project manager with JLM Energy, the Rocklin California company that built and is installing the microturbines. 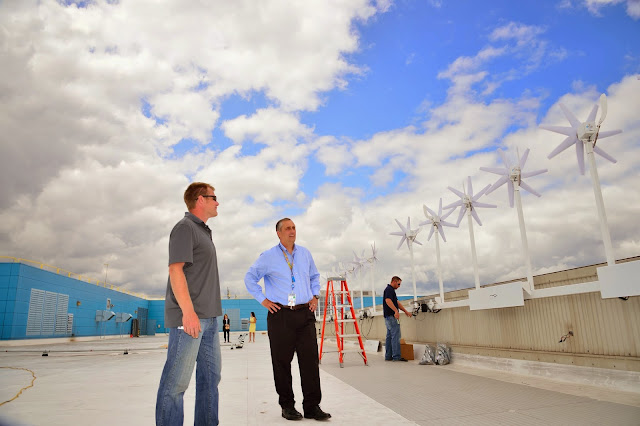 Intel is turning the roof of its Santa Clara headquarters into a mini-wind farm with what it says is one of the largest micro-turbine arrays in the country.

The V-shaped formation of 58 wind-powered turbines, being installed this week, is expected to generate about 65 kilowatt-hours of power that will be used to provide electricity to the conference center in the rambling Robert Noyce Building on Mission Boulevard.

The chipmaker called the micro-turbines a “proof of concept” project.

“We are trying to understand how this type of technology integrates into Intel and where are the best locations for it around the world,” said Marty Sedler, director of Intel’s global utilities and infrastructure.

“We’ll share the data and share the information so other people can apply it to their own businesses and homes,” he said.

The micro-turbines are 6 to 7 feet tall, weigh about 30 pounds each and are positioned at the roof’s edge where they can gather the most wind, which averages about 8 to 9 miles per hour in the area. They share the roof with an array of solar panels.

“This is just another prong adding to our sustainability program,” Sedler said

Intel’s new wind turbines arrive at a time when major tech companies are turning to green power. Apple and Google announced green projects in February. Apple is building a solar farm in Monterey County and Google is developing a forest of wind turbines on Altamont Pass near Livermore.

Intel says it has been green for years, and was recently recognized by the U.S. Environmental Protection Agency, for the seventh year in a row, as the largest voluntary purchaser of green power in the country. It has solar installations on 12 Intel campuses in the U.S., Israel and Vietnam that generate more than 12 million kilowatt-hours of power per year of clean energy, as well as a solar hot water system that supplies nearly all the needs of Intel’s two campuses in India.

The new array “is one of the largest we’ve identified anywhere,” Sedler said. “One of the things Intel does that’s a little different from other companies is that all the projects we have done to date have been on our campuses. It’s not the answer, it’s one of the answers. The key is to get off the grid.”