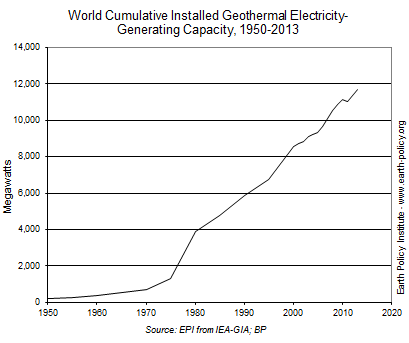 Geothermal power’s global electricity capacity has grown by 16% over the last five years, while its power for direct uses has increased by 45%. 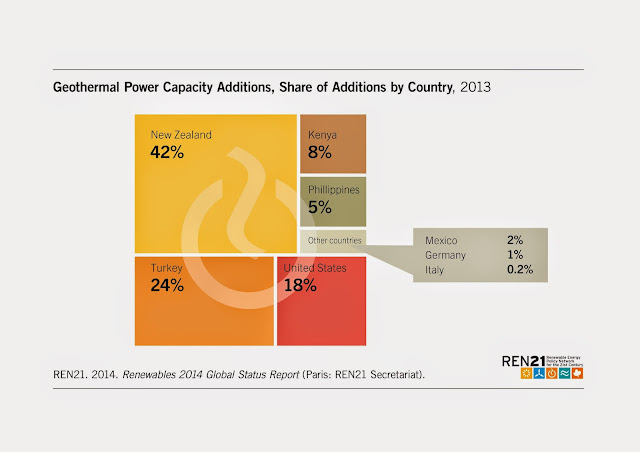 Geothermal power keeps on growing across the world. Plants for electricity generation, direct uses such as heat pumps and remote heating, but also farming activities and even leisure parks are multiplying thanks to the harnessing of the earth’s steam, with benefits for communities and businesses in the area where the renewable sources are found.

The World Geothermal Congress 2015 (WGC) has reported that over the last five years geothermal power’s generation capacity has grown by 16% and promises an even more considerable development in the future: its global installed capacity is currently 12,635MW and it is estimated to rise to around 21,400MW in 2020. Pacific and African markets are the most promising ones according to the WGC. Over the last few years the highest added installed capacity growth rates have been achieved in Kenya (+400MW) Turkey (+306MW) and New Zealand (+234MW). The latter, together with the Philippines and Indonesia, is pinpointed as one of the countries with the greatest growth potential also in the near future.

Also direct geothermal usages are undergoing a strong global development: over the last five years, the thermal capacity installed for this purpose has grown by 45%, reaching 70,330MW and saving 148million tonnes of CO2 emissions each year. Heat pumps are the technology that has mostly pushed this boom, achieving 65% of the total MWs generated for direct uses. And the data also reflects on the growing number of countries that rely on Ground-Source Heat Pumps: 26 in 2010, they have become 48 in 2014. The ranking of countries with the greatest installed capacity is led by the United States, China and Sweden, and the development in this sector has produced significant effects both as regards the economy and employment, with some 34,000 new jobs each year in this sector.

The connection between geothermal power, employment and businesses is practically constant wherever the earth’s energy is converted into various wide-ranging uses. This is confirmed by the example of Tuscany and Enel Green Power’s plants in the Italian geothermal district: more than 1,000 jobs have been created by satellite activities around power plants. Geothermal power in Tuscany has also helped develop agrifood chains that, among other things, are at the centre of EXPO 2015, reduce domestic expenses for municipalities that have remote heating and, recently, offer a discount on bills to more than 5,200 firms in the provinces of Pisa, Siena and Grosseto which, thanks to an agreement between Enel and the Tuscany Region, will be granted a discount of around 10% on the supplied electricity price.