Due to its lack of important fossil fuel fields, this Latin American country has been ‘forced’ to choose green sources, which account for 60% of its domestic electricity generation, so this has become one of the most interesting country in the continent, with Enel Green Power also building its first wind farm at Melowind, in the Cerro Largo region. 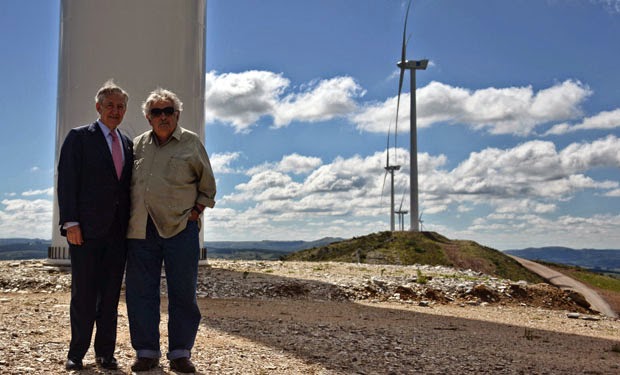 Without oil, gas and coal, renewable energy somehow becomes a necessary choice. This may sound like a cliché, but it’s actually this realisation that has led Uruguay to assign an increasing role to green sources within its energy future.

Renewable sources in Latin America are often – and rightly – associated with countries like Brazil, Chile and Mexico, which advance by installing new MWs of green technologies, especially wind and solar power. And the news regarding Costa Rica meeting its energy needs only through renewable energy recently hit the headlines on the media. But within the Latin American renewable energy scenario, Uruguay also plays a highly significant role.

Lacking significant fossil fuel fields and with a practically saturated hydroelectric potential, Uruguay has been ‘forced’ to choose renewable sources to support its development up to 2008. Since then, the different political forces and the two presidents that have led this country have supported this choice, and in 2010 the government approved the ‘National Energy Policy 2030’, increasing the use of local resources and the participation of the private sector in energy generation.

In Uruguay Enel Green Power has started building 50MW of wind power at Melowind, in the region of Cerro Largo, and has opened an office in Montevideo, showing the attention paid to this country, “characterised by its abundant natural resources, with a rapid economic and population growth and a stable regulatory framework”, as underlined by EGP CEO Francesco Venturini.

60% of Uruguay’s electricity generation comes from renewable sources (hydro, solar, wind and abundant biomass). In 2014 the per capita expenditure for electricity bills fell by an average 6 percent, also thanks to policies on renewable sources, on which the country spends 3 percent of its GNP in research and is set on allocating a $6million investment in 2020.