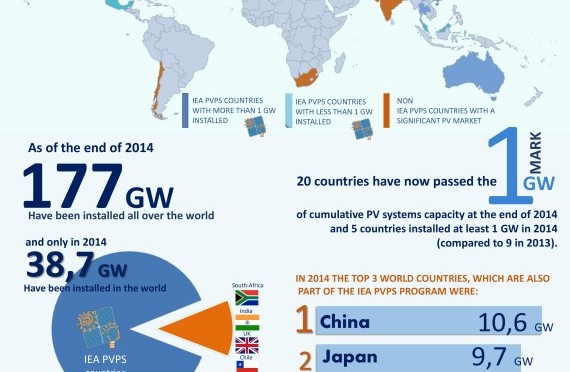 A new report from the International Energy Agency has concluded that the global solar PV market experienced a “new year of development, with limited expansion globally.”

The International Energy Agency’s (IEA) Photovoltaic Power Systems Programme (PVPS) released its 3rd edition of the Snapshop of Global PV Markets report, which aims to produce “unbiased reports on the development of PV over the world.” Specifically, the IEA PVPS mission is to “enhance the international collaborative efforts which facilitate the role of photovoltaic solar energy as a cornerstone in the transition to sustainable energy systems.” The group includes participating countries from all over the world, as well as the European Commission, the European Photovoltaic Industry Association, the Solar Electric Power Association, the Solar Energy Industries Association, and the Copper Alliance.

Interesting, despite the apparent “limited expansion globally,” the report’s authors note that “the limited growth hides many contrasted developments in various regions.”

One of these hidden contrasts is the stabilization of the Chinese solar PV market, which despite missing many publicized targets, reached over 10 GW in 2014. Add to this the rapid growth of Japan’s solar PV industry, which hit 9.7 GW in 2014, and the Asian region is very clearly confirmed as the leading solar PV region in the world.

On the other hand, the European market continued to decline in 2014, in spite of the UK’s growth throughout the year, establishing itself as the leading European market with 2.27 GW. Germany declined again, to 1.9 GW in the year.

South Africa became the first African country to install close to 1 GW in 2014, while many more countries across the continent have a bevy of projects in various stages of construction and preparedness.