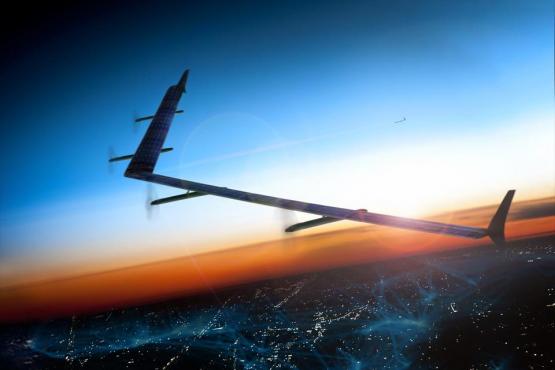 Looks like Facebook’s ambitions are of a flying variety. Code named the Aquila (that is The Eagle to you), Facebook plans on beaming down the internet to its users through that very Eagle.

At its F8 developer conference today in Fort Mason, Facebook revealed plans that showcased a V shaped unmanned vehicle that has a wingspan comparable to a Boeing 767, and manages to weigh less than your average car, it will be up in the air for three months uninterrupted, powered by solar energy.

Many drones, at a height of feet will beam internet to the users using laser communication technology, also using it to communicate with each other. Test flights are expected to begin this summer.

This is a complete design that came out after Facebook aqcui hired engineers from the UK based company Ascenta. This also happens to be the company’s first foray into, well, hardware; a completely software oriented company that will take up engineering challenges of sub atmospheric conditions.

Google too made a similar acquisition, when it acquired Titan Aerospace last year for its drone program. Titan’s drones take high-quality images in real-time that could help with Maps initiatives. The drones could as well contribute to things like “disaster relief” and addressing “deforestation,” said a Google official last year.

Well, the internet space is getting competitive; one of the finest examples being of Google having super speed fibre networks and high altitude balloons in their arsenal.